Do mandatory cloth masks pose a risk to training?

Gyms in my province are changing up the rules once again, on Monday. This time around non-medical masks are required throughout the building while not exercising as well as while exercising (previously we could slip it down/take it off during reps).

I completed my workout today while wearing a mask for the whole period, I had no issues, but my gym has a sign that actually promotes not wearing a mask while working out as it can cause health risks. The gym owner is a bit biased so I'm not reading into that too much however, the WHO also advises against wearing a mask while exercising (re: masks, exercise section).

A previous question looked at the pros/cons/risks of altitude training masks. This isn't quite the same as these masks aren't purposely restricting airflow.

So, do non-medical cloth masks pose any health risks if you wear them while exercising? Both a) while weight training and b) while performing cardio. I'd appreciate answers supported by applicable studies.

Using non-medical face masks during exercise does cause some minor discomfort, however, it appears to be safe when used by healthy individuals in short-term sub-vigorous intensities. Long term effects have not been studied.

"In healthy subjects, aerobic exercise with either a surgical mask or N95 respirator is safe and feasible. Although it may be associated with some discomfort, masking has only minor effects on physiological parameters during exercise." 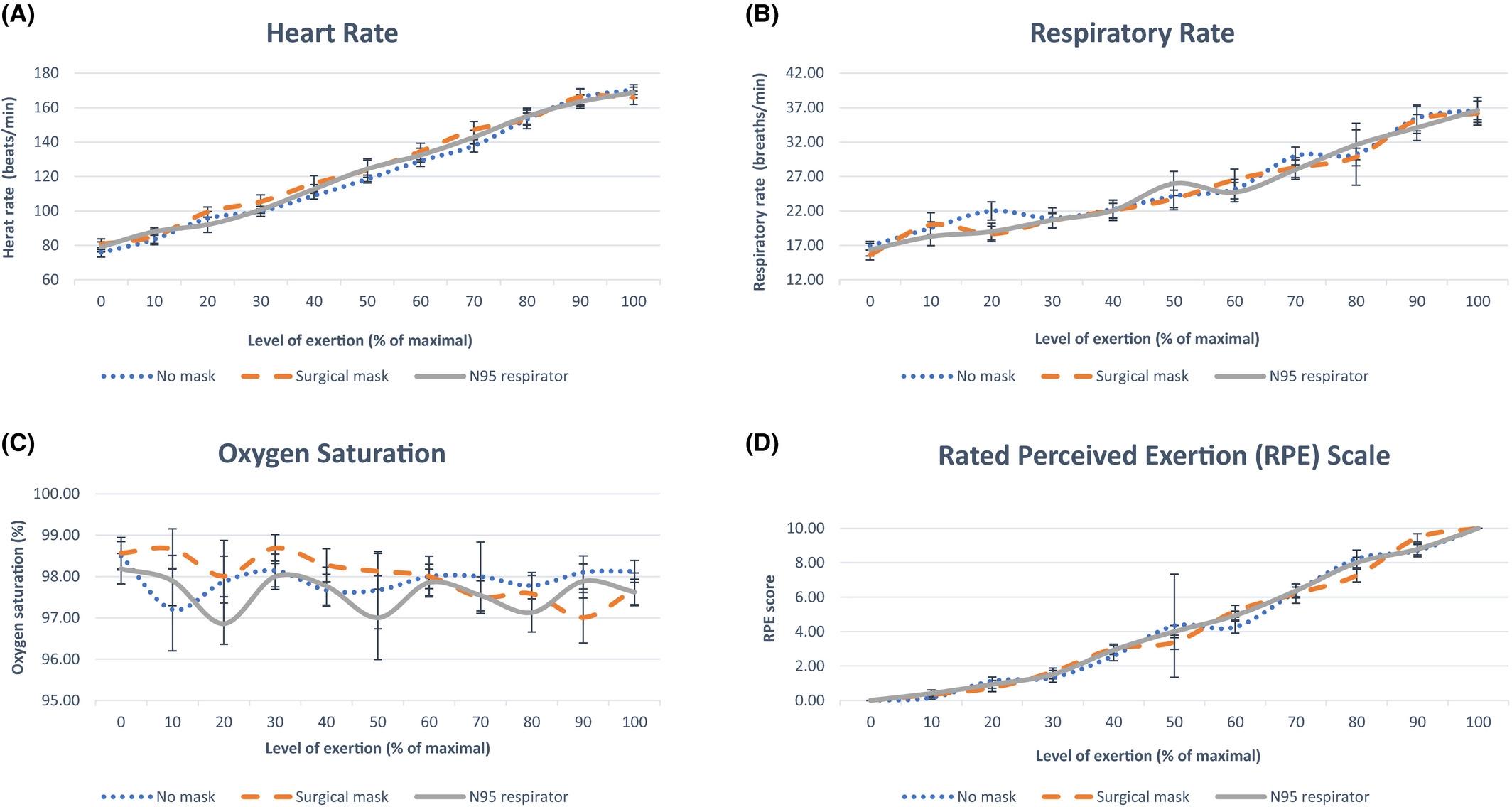 "The laboratory study to investigate the physiological effect of wearing a facemask found that it significantly elevated heart rate and perceived exertion."

"Exercise with a facemask definitely has a toll on the human body and it is advised to adjust the exercise intensity when masked."

With RPE being a self-reported factor, one could conclude that the psychological effects of wearing a mask while exercising are individualized, while heart rate is increased regardless. Increased heart rate could definitely be attributed to an increase in air flow resistance: "Previous studies found that the use of N95 respirators leads to a mean increment of 126% and 122% in inspiratory and expiratory flow resistances"1.

Both studies noted that exercising with a mask was generally uncomfortable with the face becoming more humid and warm. Neither study looked at these effects in detail. Additionally, both studies were conducted on healthy individuals and advise against exercising while wearing a mask if you already suffer from obstructive lung diseases.

Finally, this short report has some cleanliness guidelines. They suggest washing masks frequently to prevent the mask from becoming contaminated, using a more breathable material (when selecting a cloth mask), and using multiple masks if your mask gets too wet while working out (as breathing through a damp mask would be even more strenuous).

A bit of anecdotal addition: I have definitely noticed getting warmer and I have been going through more water than usual. I think this is just because I'm sweating more; like if I worked out with a hoodie and toque on. Breathing wise, I've realized that I am simply more aware of my breathing with the mask on. It seems like I'm breathing heavier but when I stop and think, I'm not, I just feel it blowing back on me. I've now done heavy squat/bench and dead/bench days as well as a cardio day while wearing a mask. It is definitely annoying but not at all life-threatening. Bring more water, keep the gyms open.

The biggest health concern with fabric masks if "Fomites" bacterial/fungal agents that more easily proliferate in the humidity and mask confinement of human breath, which is why disposable paper masks are more practical. If you have a fabric mask, clean it daily. Just dunk it in soapy water for a minute, then ring and dry off with a paper towel, then place it in the microwave and sterilize it. One minute in the microwave should kill all germs. As for respiration, there's no quantifiable data supporting breathing hazards, though the risk of breathing in fibers is some.

Not the answer you're looking for? Browse other questions tagged strength-training cardio exercise-equipment or ask your own question.