How hip adductors stabilize core in case of weak abs

In the case of weak lower abs I always read that a common compensation pattern consists of hip adductors taking over core stabilization, that works harder to stabilize the core.

But I genuinely don't understand why this happens.

If abs are weak, why the hip adductors are overworked? I don't understand this pattern.

Anatomically the lower and upper abs is the same muscle, the rectus abdominis (the six pack). 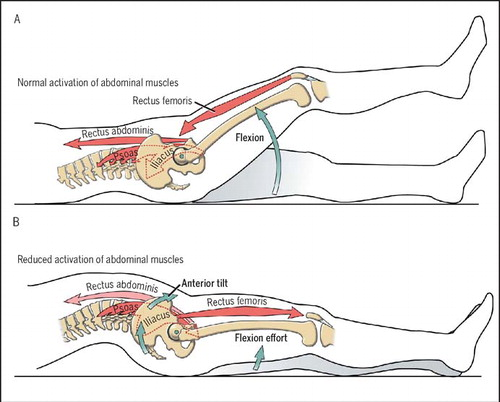 "Any muscle that is capable of flexing the hip from a femoral-on-pelvic perspective has a potential to flex the hip from a pelvic-on-femoral rotation. for this reason, tightness of secondary hip flexors, such as adductor brevis, gracilis, and anterior fibers of the gluteus minimus, would, in theory, contribute to an excessive anterior pelvic tilt and exaggerated lumbar lordosis."(1)

There also exist a functional connection between the obliques and the hip adductors. 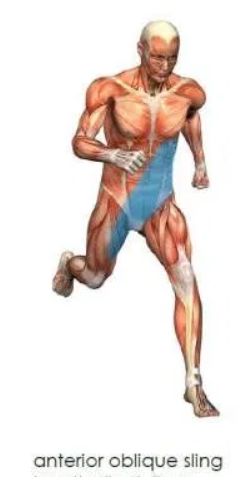 The oblique muscles on his left side work together with the adductors of his right leg to do this. This system of muscles is called the Anterior Oblique Sling.

If the obliques are weak the adductors have to work more.

Further in an interesting article(2) Dean Somerset states that:

The article seems credible but I have not been able to understand it yet. However my conclusion on all this is: if you have any tightness in the hips try strengthening the rectus abdominis and the obliques.

(1) Kinesiology of the Hip: A Focus on Muscular Actions

(2) The Side Plank for Internal Rotation Question

Not the answer you're looking for? Browse other questions tagged abdominals core hip compensation or ask your own question.

0
Adding Core/Abs exercises to my routine
6
Plank Progressions
2
How to use less abs/core in this exercise?
1
How to tighten core during normal activities?
1
Do planks tighten up hip flexors? (Back pain when doing core exercises)
6
Can an intense core/abs workout gives you diarrhea?
1
What sports or activities work out abs/core intensely without specifically being an ab/core exercise?
0
core strengthening for weak lower back
5
When and how often should I train my core/abs?
0
How to know when and how to push further my body? are my abs weak?