Scientifically speaking, how are strength and endurance not the same thing?

Half 100 is smaller than half of 101. And if you can do more repetitions with one weight it means it's getting easier... And if lifting a weight is easier than before then you got stronger. My queation is, how is it even possible to find a situation where strength and endurance are not directly correlated?

One might say cardio, but the heart is a muscle too.

Say my bicep curl is 60 pounds for once but 30 pounds for twenty reps.... If suddently I become able to do twenty-two reps with 30 pounds, how is it possible that my one rep max didn't alsp increase? And vice versa.

You seem to be making the assumption that the number of repetitions one can do at a set fraction of their one-rep maximum is fixed. This is not a valid assumption.

Take for example a person who has a squat 1RM of 100kg, and let's assume they can do 20 reps at half their 1RM, 50kg. For them, doing a high load, low rep training program might increase their 1RM to 120kg, without granting them the ability to do 20 reps at half their new 1RM. They'd almost certainly be able to do more reps at 50kg than they could before, but that doesn't mean their new 20RM is 60kg. They might be able to do 25 reps at 50kg now, but only 18 at 60kg.

Or if they instead ran a low load, high rep training program, they might only increase their 1RM to 110kg, but now be able to do 25 reps at 55kg.

My queation is, how is it even possible to find a situation where strength and endurance are not directly correlated?

Say my bicep curl is 60 pounds for once but 30 pounds for twenty reps.... If suddently I become able to do twenty-two reps with 30 pounds, how is it possible that my one rep max didn't alsp increase?

Your one rep max probably did increase, but not necessarily in exact proportion to your increase in endurance.

I don't know for weight lifting, but there is a chart from a well known book in cycle training that talks about the different zones of training and how they affect the body: 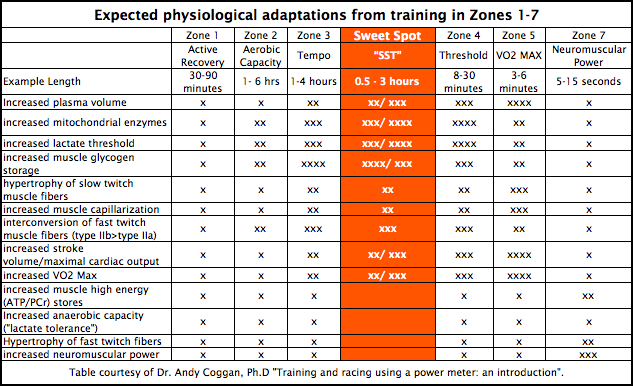 You can see that in the most intense zone (7 in this chart), performance depends on hypertrophy of fast twitch fibers and neuromuscular (i.e., nervous system) power. In areas that are more about endurance (Zones 2 and 3), performance depends on oxygen intake, the body's ability to process lactate acid, the amount of mitochondria in muscles, the amount of slow twitch muscle, and the processing of the body's stored glycogen.

Since the body's ability to perform in these different intensities depends on different bodily systems, you cannot improve simply by doing one or the other.

If you train with few reps you get stronger but most of this increase in strength comes from the fast twitch muscle fibers. As mentioned these can only work for a short period, and therefore play no role in endurance activities.

When you use muscle fibers for a prolonged time eventually more and more of these will drop out (actually the motor units) over time due to problems with oxygenation, energy supply and removal of metabolic byproducts from cells. Training endurance will cause adaptions such as increased number of capillaries in the muscles that alleviate this problem and make you able to sustain a moderate force output for a long time. This will on the other hand not improve your max strength.

Also max strength is the product of the muscles ability to exert force and the brains ability to generate a strong enough electric signal to fire as many as possible fibers at the same time. When training for max strength one improves the brains ability to generate such a strong signal. This is the "sports" mode. However this ability is not used in endurance activities. Instead the brain rotates which muscle fibers are being used. This is the "economy" mode. This rotation of muscle fibers is also an ability, and it is being trained by endurance activities.

So no strength and endurance are not directly correlated, but training for one may help a bit with the other.

someone who starts lifting weights cannot lift 100 kilos the first time. This is because the muscles are weak because they have not encountered this resistance before.

Muscle strength refers to the amount of force a muscle can produce with maximum effort. Muscle endurance is the ability of a muscle or group of muscles to apply force repeatedly over an extended period of time. my opinion is that strength cannot develop without endurance. First, the ability of the muscles to resist resistance must be developed, then the power will come out by itself. The simplest example of this is that we have difficulty lifting 10-20 kg when we start sports. Later, these weights start to seem like a piece of cake to us because the muscles now develop themselves against this resistance. Unfortunately, no one who is just starting out can lift 100 kilos all of a sudden.

Not the answer you're looking for? Browse other questions tagged strength or ask your own question.

12
How to find your one repetition maximum?
8
Is it effective to do 2 sets for size and 2 sets for strength?
18
Can I train for 'mass' on some parts of my body, and 'strength' for others?
2
Wendler's routine, should I adjust? (KG)
2
Can you build size and strength at the same time/together efficiently?
3
Question about rep ranges and muscle fiber activation.
5
Do high reps build strength?
1
Rep Range Cycling Daily, Weekly, or more
3
Are partial reps okay?
5
How accurate are one repetition maximum calculators?