How does a 125# stack have 300# resistance?
I've asked this question again and again, but I've still never gotten an answer to my question.

I understand the "band" type because as the band stretches, there's more tension. I have one.

Your machine uses mechanical advantage (or disadvantage) to multiply the resistance of the stack.

The machine presumably has a pulley system. Pulleys can multiply or divide the load that they are acting on, trading off against pulling distance. So for example, you can set up a pulley system to lift a 200lb weight with only 100lb of force acting on the other end of the pulley system, but in order to raise that 200lb weight by one foot, you would need to pull through two feet of cable. This would be called a 2:1 mechanical advantage. 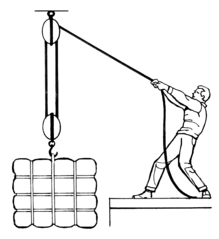 The pulley system in your home gym works the opposite way to this. It is configured to made it harder to move the stack, such that perhaps for every three pounds of force you apply to the cables, only one pound force is applied to the weight stack. The trade-off then is that the weights must move three times as far as the cable is pulled, so you need a very tall rail for the weights to move up and down.

I can't be sure of the exact specifications of your gym, but 125:300 is not exactly 1:3. I would speculate that it is a 1:3 pulley system and there is actually only 100lb of moving weight (and the additional 25lb are non-moving parts).

Not the answer you're looking for? Browse other questions tagged weightlifting bodybuilding weights resistancetraining or ask your own question.

34
Protein: How much is too much?
10
Weight vs resistance
7
How many sets and reps should I do as a beginner?
4
Implications of the fact that resistance bands doesn't provide constant force for pull throughs and in general
6
Program Feedback
6
Does SLOW reps have the similar effect as high resistance
1
How to determine the resistance of resistance bands when it is not marked
3
How to strengthen wrists to prevent pain while lifting
2
Snatch: Mind Cues to Improve Hip Contact and Prevent Bar Swinging Forwards