Should one incorporate rotation exercises into strength training to get strong hips? 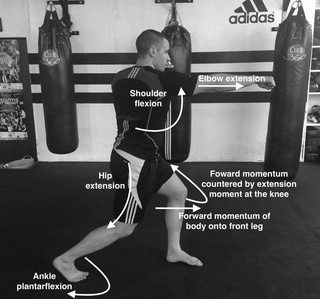 hip extension at the rear leg causes a forward momentum of the body that has to be countered by an extension moment at the front knee. This hip extension is the source of much of the power of the punch, especially in the start of the punch.

However a punch is not a forward motion, as much as a rotation both of the pelvis and the thoracic spine: 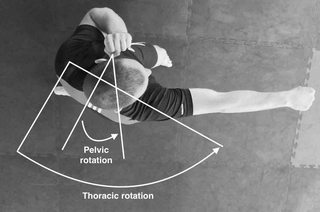 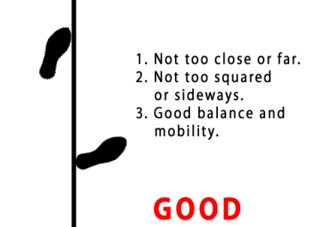 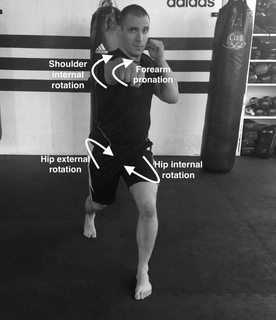 The biomechanics of a javelin throw (2) is quite similar to those of a boxing punch:

"The acceleration of the right hip comes from acetabular/femoral internal rotation (AFIR) and extension."

"The brakes of the hip drive are left side AFIR, abduction, and extension."

I am thinking that this maybe causes weak hips which in turn causes tight hips?

Should one incorporate rotation exercises into strength training? If so, how?

Further during running hip rotation also play an important role. However when running the thoracic rotation is in the opposite direction of the pelvic rotation (3):

"Rotation of the hips (pelvis) in the transverse plane (think: spinning around in circles) is the key to running faster and more efficiently."

"If there is minimal transverse hip rotation, the role of the glute max is minimized."

(1) The Biomechanics of a Knockout Punch

[A boxing straight punch,] like in the gait it seems that when one leg is internal rotation the other one is in external rotation.

It therefore seems to me that the a right punch from boxing is closely related to the gait?

No, because they only appear related if you ignore all the other hip movements occurring at the same time that differ completely between these two movements, and focussing only one one particular articulation within a three degree of freedom joint. In gait, you have the pelvis in a mostly stable movement (i.e. not undergoing acceleration), with the legs moving through unloaded hip flexion followed by loaded hip extension, with a barely perceivable. In a punch, you have the balls of the feet fixed in position extension of the rear hip is used to drive a powerful rotation in the torso.

I would also think that shotputting, throwing a baseball, hitting a baseball etc. would biomechanically be the same movement as a right punch?

Shotputting is a very different movement, involving spinning of the whole body while hopping from foot to foot. Throwing a baseball and swinging a bat are different because they don't have the requirement to withdraw the punch and return the the starting, stable position, so a pitcher or batter can let the swing take them off balance and shift their weight entirely onto one leg.

This therefore seems like a fundamental human movement pattern.

To reiterate, not if you've isolated hip rotation from the other movements which it is occurring in concert with. Then it's just an isolated articulation.

Typically this movement is not trained in common strength training programs. Most other fundamental human movement patterns like the hinge and squat are. Following the philosophy of "use it or loose it" I think this may be a bad thing.

It's pretty rare for any sport to actually require loading of the hip rotators (recalling that the hip rotation in boxing is performed by the much stronger hip extensors, not the hip rotators), so hip rotator strength is not a concern for most athletes. In those that do require rotation, which is pretty much only those that require rotation with one leg off the ground, they'll generally get far better training from just performing their sport than they would from deliberate resistance training of the rotators. E.g. a kickboxer would use their internal rotators in throwing a roundhouse kick, but they wouldn't get a good training effect from swinging a kettlebell, because the speed of contraction would be so different. They'd get a far better training effect just from kicking a heavy bag.

I am thinking that this maybe causes weak hips which in turn causes tight hips?

Weak muscles do not cause tight muscles.

Should one incorporate rotation exercises into strength training?

No. In the words of Anthony Kiedis, that would be a waste of time.

Not the answer you're looking for? Browse other questions tagged strength-training hip or ask your own question.

2
Integrating running into strength training schedule
3
Integrating Olympic lifting exercises into Strong Lifts
1
Should your pelvis rotate when you walk and run?
5
Should strength training be altered according to whether you're seeking size vs strength?
3
Strength training gym equipment exercise rotation
2
How strict should one get with their diet to lose belly and hip fat?
2
How to correlate reps into training program when doing isometric exercises?
4
Looking for a good rotational exercise to add to Starting Strength program
1
How can I train my internal hip rotators?