Which is the role of biceps in a pull-up/chin-up?

I want to understand which is the precise role of biceps in a pull-up. 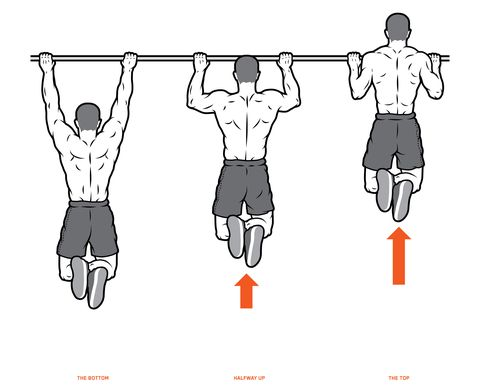 Here it's written that;

The pull-up is a closed-chain movement where the body is suspended by the hands and pulls up. As this happens, the elbows flex and the shoulders adduct and extend to bring the elbows to the torso.

So, simply put (by ignoring the accessory muscles) a pull-up consists of:

Now, let's make a comparison between a pull-up (with pronated grip) and a chin-up (with supinated grip).

Here it is written that:

Chinups beat biceps curl to build bigger arms. Chinups force you to lift more weight. They force you to lift your own body-weight. A guy weighing 75kg like me can easily build the strength to do one Chinup. I can do weighted Chinups with a plate of 20kg for reps. That’s 95kg total. Try to Biceps Curls 95kg or even 75kg. More weight is always better for gaining muscle. If you want bigger arms, do Chinups instead of curls.

So, it says that chin-up is a very effective biceps exercise since it forces you to barbell curl with you weight.

Well, although a chin-up is very difficult compared to a normal (low-weight curl), I can't belive it's exactly equal to a 75kg (or so) barbell curl. If it were, one like me that does 24kg barbell curl would be able to do not even half chin-up, while I can do about 5 reps.

But at the same time, I can't negate this description from a mechanical point of view. From the previous pull-up definition, it seems to me that movements 1 and 2 are two simultaneous but independent movements. So, they appear to me to be a barbell curl with your weight and a sort of row with your weight, according to what stronglifts page writes.

Where is the solution?

It's known that chin-ups provide a higher biceps activation than pull-ups. It's written here, for instance:

The main different between pull ups and chin ups is how the position of your hands affects the function of your elbows. In an overhand, also called a pronated grip, your biceps (the muscles on the front of your elbows and your primary elbow flexors) are in a mechanically disadvantageous position. Conversely, when you palms are facing towards you, also called a supinated grip, your biceps are in a stronger position and better able to generate force.

Well, what I don't understand is:

So, it says that chin-up is a very effective biceps exercise since it forces you to barbell curl with you weight.

I wouldn't read it like that. The author you quote stated:

I think this claim is dubious, but it's also not claiming that a chin-up is equivalent to bicep curling your whole bodyweight, merely that it involves more weight than a bicep curl. (The point the author seems to be missing is that a lot of that weight is loading the latissimus dorsi, so it's reasonable to assume that a proportional amount of that growth stimulus will go to the lats rather than the biceps.)

why a supinated grip allows your biceps to generate more force?

The biceps flex the elbow as well as supinating the forearm. In a prone grip elbow flexion exercise, if the biceps were to activate, they would attempt to supinate the forearm, and forearm pronators would need to activate to counteract this. The elbow flexion force that biceps could exert would then be limited by the amount of supination force that the pronators could counteract. So in this position, the elbow flexors that do not cause supination (brachialis, brachioradialis) need to act as the main elbow flexors. Whereas in a supinated position, the biceps are free to act at full strength because the forearm is already maximally supinated.

Active elbow flexion is not necessary for either chin-ups or pull-ups. If you were able to only activate your lats and not any of your elbow flexors, the elbows would still flex due to gravity. But if the elbow flexor muscles do activate, then they will assist the movement, taking some load off the lats and allowing you to lift more weight or perform more reps. So compared to a pull-up, in a chin-up the elbow flexors perform a greater proportion of the work.

Not the answer you're looking for? Browse other questions tagged workout bodybuilding bodyweight-exercises pull-ups chin-ups or ask your own question.

8
What muscles are targeted by these different variations of pull-ups: standard, chin-ups, and the neutral or parallel close grip pull-up?
5
One arm chin/pull-up and the lat pulldown machine
8
Overcoming a chin-up plateau of 6 in a row
6
Why perform chin-ups/pull-ups to failure on Starting Strength?
3
forearm during weighted pull-ups and chin-ups
1
Why I can't do pull ups/chin ups properly however I am lifting heavy weight and also doing lots of push ups
4
Modified pull ups when the bar is too low
1
How to fix my uneven pull up?
4
Why are chin-ups harder than pull-ups?
0
Biceps and Triceps exercises: are both involved?