How can we prevent shoulder impingement in the overhead press?

Here it is written, about the Overhead Press, that 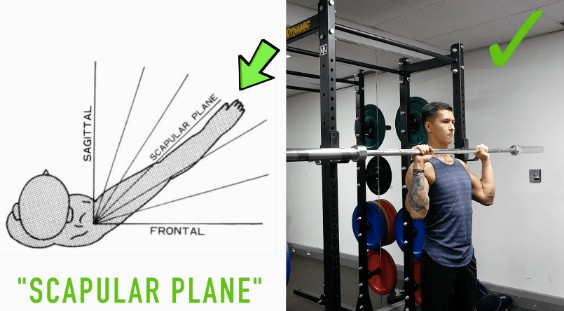 First question: is the choice of working in the scapular plane made to reduce shoulder impingement (like in lateral raises)? If it is, can you explain me why? Does having a 30 degree angle between the elbows and the frontal plane creates space between the humerous and the AC joint for the rotator cuff tissues? 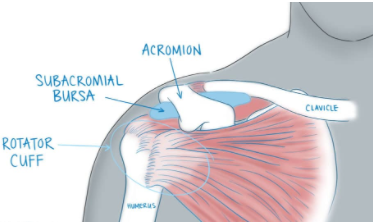 Then, always there, it is written that:

Then only as you press up should you naturally allow your elbows to turn out to the side. 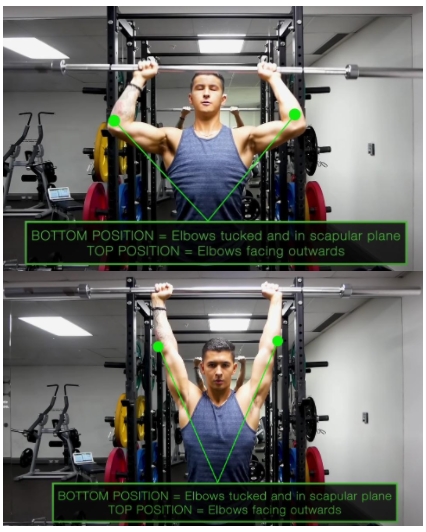 Second question: why is this necessary? Why can't we continue the movement with our elbows in the scapular plane? 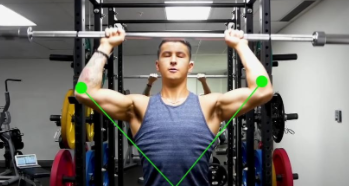 except for the fact that in the overhead press the forearms are rotated backwards compared to the bench press scenario. Is this that avoids shoulder impingement?

First question: is the choice of working in the scapular plane made to reduce shoulder impingement (like in lateral raises)? If it is, can you explain me why? Does having a 30 degree angle between the elbows and the frontal plane creates space between the humerous and the AC joint for the rotator cuff tissues?

No, it's nonsense, seemingly made up by the author of the article. They cite two papers in support of this claim, stating that these papers demonstrate that an overhead press which begins with the upper arms in the scapular plane "to not only be a safer and more comfortable position for the shoulder joint to be in... But also more effective for overhead pressing". Neither of these papers actually makes any claims even remotely close to what the author is alleging. I'll summarise these papers below.

Second question: why is [moving the elbows outwards towards the top of the movement] necessary? Why can't we continue the movement with our elbows in the scapular plane?

Third question: How can we avoid shoulder impingement?

Impingement can (but does not necessarily) occur at the extremities of shoulder rotation. This is why exercises like the upright row and guillotine bench press are often maligned - because they put the shoulder into extreme internal rotation as the bar approaches the collarbones. Impingement is also a common diagnosis among baseball pitchers, who wind up by putting their shoulders into incredible external rotation.

A sensible approach to avoiding impingement would just be to stop and reassess any movements that cause you to experience shoulder pain. A more conservative and probably excessive approach would be to just avoid any exercise that pushes the limits of shoulder internal or external rotation.

That said, perhaps the most ridiculous thing about this overhead press article is that the technique he advocates actually does put the shoulders into extreme external rotation. At the bottom of the lift, he doesn't appear to even be able to lower the bar below his throat because his requirement of keeping the elbows in the scapular plane requires increasing amounts of shoulder external rotation as the bar is lowered. If you imagine giving someone a high-five, and they push your hand back in that position as far as it will go, that's the feeling of hitting the end of your range of external rotation. It could be argued that this scapular plane overhead press actually increases the risk of shoulder impingement.

I see that you have multiple questions. I can't help you with all of them, but I can help with the main question you have i.e. avoiding shoulder issues when overhead pressing.

I have supraspinatous tendinosis on my right shoulder from strain and bad form. Thanks to this, I can tell when any exercise I'm doing has bad form, because my shoulder pain immediately flares up. When overhead pressing, I've found the most helpful tip is that you should pinch your shoulder blades together before you start (and during the movement) exactly like the scapular pullup (google it). That gets rid of the pain and I wish I'd been doing that earlier.

One suggestion is to remember your forearms must be perpendicular to the ground, no incline either forward or backwards.

About the change in plane on the top. That's to get full range of movement, if you retain the scapular plane you aren't able to get to full extension of the muscles, which is always what you should aim at.

Not the answer you're looking for? Browse other questions tagged weightlifting workout bodybuilding shoulders powerlifting or ask your own question.

2
Is Upright Row a good alternative to Overhead Press for people with rounded shoulders?
8
Dumbbell Shoulder Press: Natural vs the usual grip
7
"Triceps" dips completely alleviate shoulder pain?
1
Why should the shoulder blades be protracted (at the top) in push - ups while in bench press not?
1
Which is the role of biceps in a pull-up/chin-up?
2
Cannot keep elbows straight in bench press
2
Analysis of the bar path in bench press
2
Shoulder-Blades Position in Overhead Press
0
Proper setup for the Exernal Rotation Press Exercise