I need some advices about how to keep my elbows straight under the bar during bench press. It is known that having elbows in front of the bar creates unnecessary torque on both the elbow and the shoulder joint. I think it is also a possible cause of my slight wrist pain when I increase the load. 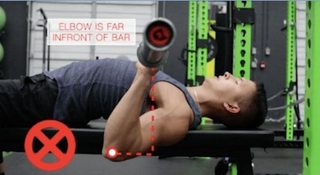 Instead, the following setup is advised: 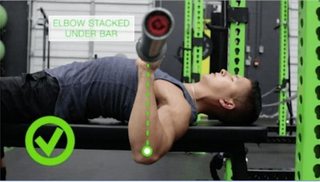 However, my situation is this: 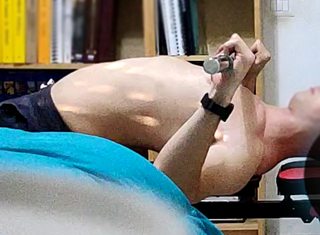 How can I adjust my elbow position? I've tried 2 ways:

2) rotating the elbows backwards. This works but results in flaring elbows, which is not advised.

The maximum angle I've been told to use is about 75°. 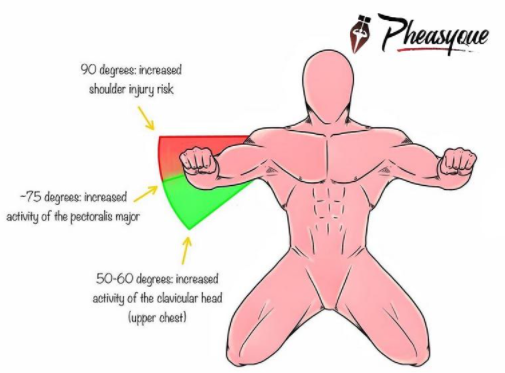 But I think to have reached about 90° to keep the elbow under the bar. And I find it very difficult to distinguish between a 75° angle and a 90° angle without seeing myself during the exercise. So, for safety, I would have preferred an angle of about 60°.

2) Starting with the bar lower. This seems too strange to me. In my initial picture, I have the bar above my nipple in the starting position. To start with straight elbows, I should have put it above my upper abs.... it seems quite strange and wouldn't have worked very well as with the bar diagonal path, my elbows would have put again in front of the bar....

Do you have any suggestions?

The primary issues here are two: your width of grip on the bar, and your touch position. These are mutually dependent variables. That is, if you alter the width of your grip, you must also alter your touch position—and vice versa. If not, the result will be one of the contraindicated scenarios described.

Although it is unclear from the photo how widely you are gripping the bar, what is clear is that the bar is finishing far higher than recommended by your source. The cue to finish 'at nipple line' is intended to be in reference to the ceiling, not in reference to your spine or field of vision. For reference, as you are, the bar should therefore finish roughly where we can see the grey spine of the first book on your bookshelf. This alone would place your elbows far closer to where they should be, beneath the bar.

This brings up the need for an important clarification to part of the guideline, which states that we should "come down to around the level of your sternum or nipple height." The sternum is not a point, but a bone. If we are to bring the bar down to the sternum, we have a range of options, including heights on the chest being contraindicated within the same advice. A more rigorous statement would be that the bar should fall somewhere between the peak of the chest (nipple line) and the bottom of the xiphoid process of the sternum. This clarification should provide ample flexibility to find a strong, comfortable position for the bar that will also meet your guidelines.

As mentioned, we are unable to see the width of your grip, but one way in which you can guarantee that your width is correct, given a specified touch position, is simply to begin at that position, place the elbows comfortably beneath the bar (in both frames of reference), and grip it naturally. Wherever your hands lie is the right width to grip the bar. Note from the diagram that you have posted above, the smaller the angle between the humerus and body, the narrower your grip will necessarily be.

As an additional note, some of the claims being made by your source are difficult to support, at least by certain interpretations.

Your source claims that retracting the scapulae throughout the press allows the head of the humerus to track properly, and activates the chest by minimising involvement of the shoulders. This is true if we interpret it in a certain way. Protraction and retraction of the scapula and glenohumeral joint should naturally accompany flexion of the humerus, horizontal and vertical. That is, the shoulder girdle should move forward and backward with forward and backward motion of the elbow. This minimises the joint angle at the shoulder, and elongation and activation of the anterior deltoid, and hence maximises involvement of the humeral flexors (pectoralis major) and shoulder protractors (pectoralis minor and serratus anterior). Not only are these muscles physically larger, they are in a stronger position due to the length-tension relationship.

If the phrase 'throughout the press' is, however, interpreted as meaning that the scapulae should be retracted whilst the humerus is flexed, this is both unnatural and unconstructive, most obviously because it will prevent activation of the powerful protractors, and place that extra work on the flexors.

Similarly, your source claims that a slight arch in the upper back places the glenohumeral joint in an 'externally rotated, safer position.' This is plainly false, and in fact contrary to the truth. When arching the back, the humeri are consequently internally rotated. However, without an appropriate citation, it is questionable whether rotation of the humerus by such a small degree would have any meaningful effect on the stability of the joint.

What is true is that a back arch slightly reduces the angle of extension of the humerus, reducing the degree of elongation of the humeral flexors at the point of contact with the chest. It also moves the line of pull slightly closer to the orientation of the fibres of the pectoralis major. The result is a shorter, stronger lift, but with no inherent difference in shoulder stability.

Not the answer you're looking for? Browse other questions tagged weightlifting exercise-technique bench-press powerlifting biomechanics or ask your own question.

4
Bench plateau, while other lifts continue to grow
4
Correct form of cuban rotation with a single dumbbell
0
Fine tuning skull crusher weight/reps/form
3
Power Clean Form Check (and technique questions)
2
How to rack/unrack the barbell properly in bench press
3
Which is the proper shoulder-blades setup for front squat?
2
Analysis of the bar path in bench press
0
Muscle Snatch: elementary analysis