Bio-mechanical analysis of squat: torque on the knee and on the hip

There are many biomechanical analyzes of the squat on the web, but there are lots of things are not clear for me.

Let's consider for instance a high-bar back squat. An analysis is provided by this website: 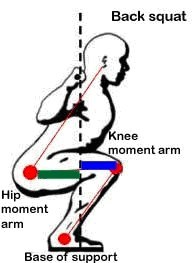 In this squat you can see the moment arms around the hip and knee – they measure from the joint axis to the line of force. In this bar position the moment arm around the hip is slightly longer than that around the knee. This means the hip extensors (gluteal muscles) will be doing slightly more work than the knee extensors (quadriceps) in terms of the force they’ll need to generate to overcome the load.

The trunk, knee and hip stabilisers will be worked significantly, especially as more load is added.

I've sketched the depicted scenario in this way: 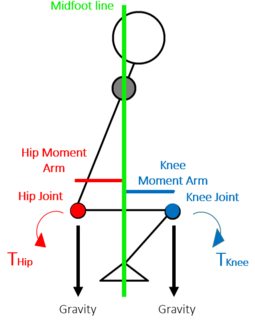 Since the two moment arms are not necessarily equal (it does depend on the back inclination), they can be equal and opposite only if the weight acting on the knee joint is different from that on the hip joint. How can we ensure we are balanced?

External Forces acting in squat at the bottom: 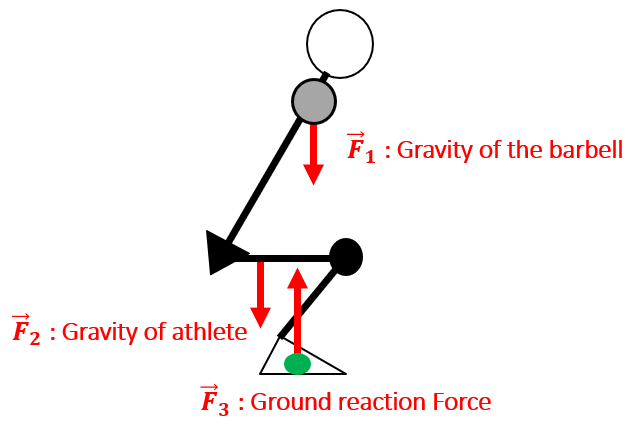 To be properly balanced (and not to fall backwards or forwards), shouldn't the two torques (referred to the midfoot) be equal and opposite?

No. In order for a body to be balanced, the sum of all external torques, including both pure torques and torques resulting from coupled forces, must be zero.

Is it important [...] that the two torques [...] are not too high? These analyzes stress the fact that the knee torque may be greater (bad) or lower (good) accordingly to the squat variation we choose (front, low bar, high bar). But it seems a non-sense to me, as we want to gradually increase the load as much as possible whilst mantaining proper form.

Yes, your intuition is correct here. It is a common mistake in biomechanical analysis of lifts to try to minimise knee torque, for fear of causing knee injury. This is where the myth of squatting with your knees moving beyond your toes being harmful came from. But creating stress on the knee is actually the entire purpose of leg strengthening exercises, and is the mechanism through which growth of the quadriceps is stimulated.

The consequence of attempting a lift where knee torque demands are greater than what your body can provide is not injury, it is merely that the lift will be failed.

Which are the "Knees stabilizers" the website refers to and which is their role?

As a rule of thumb, I would suggest that any time anyone talks about "stabiliser muscles", or worse still, the ubiquitously used "small stabilising muscles", without being able to actually name those muscles, that person probably doesn't know what they're talking about, and should be ignored.

There are two definitions of "stabiliser muscles": They are either muscles which contract isometrically to maintain posture or fixate a joint (such as the front deltoid during a bicep curl, or the trunk musculature during a squat), or the muscles responsible for keeping the load in balance in a free-weight lift.

In the squat, the only challenge to balance is the weight tipping too far forward or back, and it is actually the prime movers of the exercise (the calf, quadricep, and gluteals) that are responsible for stability.

Some exercises do have distinct stabiliser muscles though, for example the bench press primarily works the pectoralis and triceps muscles, but uses the latissimus dorsi and deltoid muscles for stability, where the lats activate to bring the bar back if it shifts up over the face, or the deltoids will activate if the bar shifts down too low on the chest.

Not the answer you're looking for? Browse other questions tagged weightlifting workout squats legs lower-body-strength or ask your own question.

3
Why knee and hip torques in Squat are always referred to the midfoot line?

10
Joint impact of ATG Squats
2
squats and alignment of knees
3
Squat accessory movements - Does the inclusion of both leg extensions and sissy squats make sense?
3
Why should the knee point outwards in squat?
1
How can we be balanced during a snatch?
4
Do squat and deadlift work the hip flexors and extensors in a balanced way?
2
How to be balanced and stable in Good Morning + Squat
1
Why not pushing the knees out of the toes in Squat?
3
Why knee and hip torques in Squat are always referred to the midfoot line?