Why are natural bodybuilders so big?

I have noticed that a lot of natural bodybuilders (or at least people who claim to be natural) are insanely muscular for a natural athlete.

Jim Cordova for example is very big and it's hard to believe he's actually natural. I have been training for 12+ years and I am nowhere near that big, but it's not only me, consider natural athletes like Al kavadlo, Frank medrano, Olympic gymnasts and weightlifters (the natural ones), etc, all those are insanely strong and nowhere near as big as a natural bodybuilder.

One may claim that the athletes mentioned above are not that muscular because they train differently, however there have been studies that have shown that muscular hypertrophy is similar no matter the rep range used (reps up to 30-40 produce similar muscle hypertrophy) so even is they trained in less or more intensity, muscle growth is the same at least up to a point.

Also both calisthenics and Olympic athletes do use progressive overload and some of them are very strong, for example Al Kavadlo can do single arm pull ups, gymnasts can do extremely difficult exercises like planches, malteses, etc so you can't argue that they are not strong.

So I want to ask what do natural bodybuilders do more and get do big? Is it steroids on low dose? Is it genetics?

I think steroids could be the cause since I have heard of ways being used to trick or avoid blood tests.

Another thing worth considering is the fact the natural bodybuilding contests allow athletes who have had steroids in the past but have stopped now and there are some claims that steroids could have some long term benefits for muscle growth and that could be the cause for those gains if it's true.

Being heavier in other sports may be detrimental. It makes calisthenics harder, so gymnasts and other calisthenic athletes typically want to keep their bodyweight lower so it's easier to do flips and stuff.

Though you compare a strength athlete that doesn't have weight classes (strongman) to a bodybuilder and you get a different story: 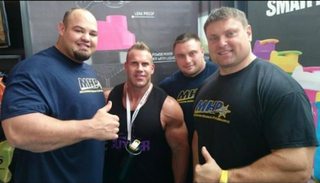 (Note: The strongmen are slightly closer to the camera, but they are certainly still way bigger).

In the image you have Brian Shaw (left) and Zydrunas Savickas (right) next to 4x Mr. Olympia Jay Cutler (center). Now, neither of these people are natural, but they all have similar goals. To get as big as possible. Natural athletes competing in the respective sports would show similar results (just smaller and a little more bodyfat). The difference is strongmen don't particularly care about their bodyfat levels, so they don't spend half the year cutting to extreme lengths. This allows them to just continuously grow unimpeded by overly restrictive diet.

Differences in training styles and focus

You are correct in that rep-ranges don't affect hypertrophy as much as previously thought (at least below 40), but you still need volume to get enough stimulus to grow muscle. A strength athlete is trying to get as strong as possible, they need to lift as heavy as possible. Lifting heavy in compound movements is far more tiring, so it's likely that they don't lift as much total volume. For example, a comparison may be a typical 5x5 squat routine at 300 lbs, you'd lift like this:

On top of that, a bodybuilder is going to do weight training geared to generating more volume which will build more muscle. A strength athlete in contrast may do accessory work to fix imbalances and train technique. That kind of work doesn't necessarily build more muscle.

One bodybuilder that we can use to compare what's possible naturally is Greg Doucette. 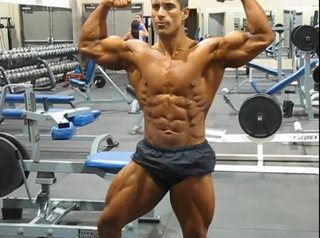 In that image, he claims to be natural. I trust that he's telling the truth only because of how flagrantly open he is about his history of drug abuse.

Another show of genetic potential is Chris Bumstead at 18 years old. 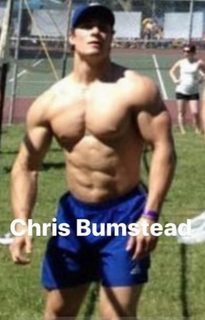 According to him he wasn't even training for bodybuilding at the time that photo was taken. He already clearly had a lot of potential. The reason I believe him when he claims natural in that photo is because he's Mr. Olympia Classic Physique. You don't become the best in the world with mediocre genetics.

Yes. You're right. It is possible to take steroids for years, come off, and pass drug tests for bodybuilding shows. You're not going to be as big as you were on steroids, but you will be bigger than you would naturally. It's not everyone, but yes. People do it. To pretend otherwise would be wrong.

However, just because someone has an impressive physique does not mean they're on PEDs.

I'm definitely not going to speculate on whether Cordova or anyone else is genuinely natural, except to say that I don't take anyone at their word on that because (a) it's not really any of my business and (b) they have every reason to lie to me.

But I will say that genetics plays a huge factor, as DeeV noted. More than most people realize, because we have a tendency to focus on the things we can control, and genetics is something we simply can't.

I remember seeing an interview a bunch of years ago, I think it was possibly with JP Fux, where he was asked what advice he had for "any young fans interested in becoming a pro bodybuilder" or something like that. Here's the answer he gave: "Get into the gym, start training. And if you don't grow immediately, just give it up — it's never going to happen."

Most of us hear that answer and we're kind of shocked at first, because it's exactly the opposite of the typical "you can do anything you set your mind to" sort of encouragement we're used to hearing/offering. But it's also brilliantly honest, because what he's saying is that even with dedication, even with hard work, and hell even with all the steroids and HGH you could conceivably pump into your body, if the genetics for easily building muscle mass aren't there, then you'll never be able to catch up to the pros who are genetically disposed (and who are also just as dedicated, work just as hard, and are on all the same PEDs).

Someone who's not genetically disposed could still train as a bodybuilder, sure, and still get plenty big, but they're just never going to be competitive on an IFBB professional level. Whereas for someone whose genetics are ideally suited (like anyone with a pro card), sometimes it can seem like all they have to do is walk into a gym to start gaining mass.

Not the answer you're looking for? Browse other questions tagged muscle bodybuilding muscle-gain or ask your own question.

10
Is growth of a muscle limited to the size of the opposing muscle?
9
What scientific evidence says cables build less muscle than free weights?
3
What type of physique is possible without use of steroids?
7
How many reps are ideal for increasing muscle mass?
5
Why are female steroid-using bodybuilders less muscular than male ones?
0
Natural ways to "enhance" your results?
1
Could I be a contest bodybuilder without drugs?
3
Weight has gone down several pounds, but not trying to lose weight and feel fatter. Why?