How can we be balanced during a snatch?

I'll take this video of Lü Xiaojun as a reference.

Let's consider the power phase, that is the moment I'm curious to understand better. 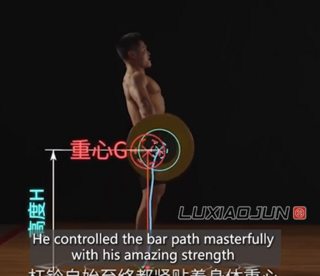 At this point, his hips and the bar are very close to each other and both are close to the midfoot. I'd say that this allows him to be balanced around his midfoot.

Now, let's see the next moment. 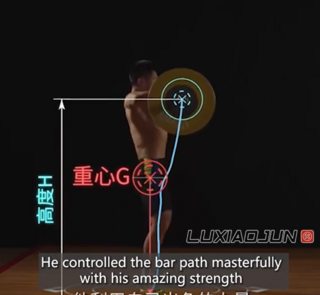 In this picture, his hips are, as before, slightly behind his midfoot, whilst the bar is much more forwards than before. How can he be balanced?

If you tried to grab a bar in that position, you just wouldn't be able to, physics would object.

Even your first picture, I'd argue that he's not exactly "balanced" as I believe you mean it.

The snatch is a very explosive lift, it essentially goes from pulling a weight off the floor, to jumping with it, to catching it in a squat position, and it's this catch in the squat position that is the most taxing on "balance".

When you catch the weight in a snatch, you're more pulling yourself under the bar into a squat position than pulling the weight towards you (again, physics makes this necessary; you don't want backwards momentum on the bar when you try and stop it, you won't win).

The freeze frame you're asking about is honestly kind of meaningless in the context of the question. If it helps, you can think of the movement as initial pull (balanced), floating bar (unbalanced), catch (balanced).

Not the answer you're looking for? Browse other questions tagged weightlifting workout olympic-weightlifting snatch or ask your own question.

4
Arms are too long to snatch? Advice, please!
11
Why does Dmitry Klokov stagger his feet?
4
Bio-mechanical analysis of squat: torque on the knee and on the hip
3
Is the hook grip as effective as the bulldog grip in press/jerk movements?
2
How to be balanced and stable in Good Morning + Squat
0
Muscle Snatch: elementary analysis
4
Why do many people start the Snatch with a very upright torso?
2
Avoid hitting forehead in snatch
2
Snatch: Mind Cues to Improve Hip Contact and Prevent Bar Swinging Forwards

// TODO sg: TMP solution until we are confident in our current implementation of async imports // once we are, we can move the if into the js entry file and dynamically load the mark obsolete module