Why is shoulders internal rotation often seen as the devil?

This is an example, referred to a pull up: 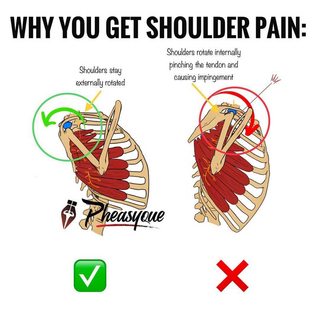 Other pictures are here.

I understand the situation depicted and how it can cause pain. But it seems strange to me that external rotation, even extreme, cannot lead to other problems. Usually a neutral situation is the best. Moreover, if shoulders internal rotation is so bad, why has the nature given us the opportunity to internally rotate our shoulders?

Regarding the example shown, while Pheasyque's explanations are usually very good, this one is definitely wrong. You absolutely cannot go into internal shoulder rotation at the top of a chin-up. The top of a chin-up involves shoulder extension (upper arms by the sides), elbow flexion (elbows bent), and shoulder external rotation. Partially internally rotating your shoulders, while maintaining shoulder extension and elbow flexion, would be like putting your hands on your hips, and fully internally rotating your shoulder would be like putting your hands behind your back and trying to touch the bottoms of your shoulder blades. You absolutely cannot reach this position, or anything even close to it, during a chin-up.

Moreover, if shoulders internal rotation is so bad, why has the nature given us the opportunity to internally rotate our shoulders?

Your intuition, that if it were inherently injurious then we wouldn't be able to do it, is most likely correct. The risks of internal rotation are probably overstated and poorly understood. (A recent study1 even demonstrated that a core assumption in shoulder impingement diagnosis, that it is caused by inadequate subacromial space for the supraspinatus tendon, was false.) It seems likely that internal rotation under load is not inherently injurious, but is possibly just a situation in which chronic overuse injuries can develop.

The misunderstanding here may be that internal rotation is a common mistake that people naturally make in many exercises, and so it comes up frequently as something to specifically avoid. For instance internally rotation in a pull-up is often a mistaken attempt to "tricep pushdown" oneself up, rather than use the (exhausted) back muscles to pull.

28
What are the recommended exercise types for getting broad shoulders?
7
What is the optimal bulking / cutting rotation schedule?
2
What exercises will bulk up the pectorals and shoulders while avoiding the arms?
1
Why should the shoulder blades be protracted (at the top) in push - ups while in bench press not?
0
Proper setup for the Exernal Rotation Press Exercise
1
Barbell Row: Shoulders Internally Rotated