let's consider this picture about the barbell row: 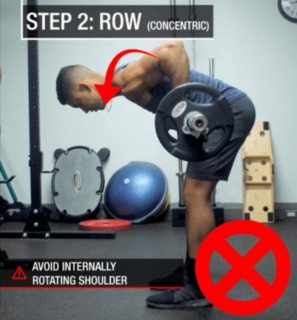 Well, I suffer from this problem {shoulders excessively internally rotated) when I perform it normally, and the simple advice "Avoid internally rotating shoulder" without telling me practically how I can do this is pointless in my case.

However, I've tried different "setups" and I have observed that this problem disappears if I simultaneusly: 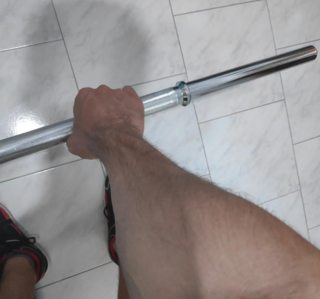 Now, I wanted to know your opinion about this setup, and eventually give me other advice if you do not agree.

About 3), I've seen it is used in some other exercises. For instance, it is suggested for push-ups and dips (I've highlighted in blue the external rotation): 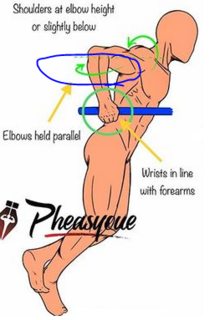 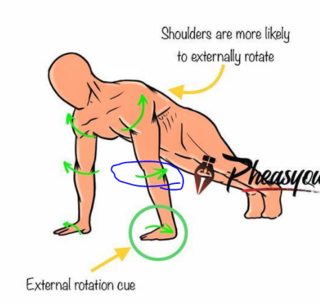 We need to talk about what shoulder rotation actually is, because none of the provided images are accurately representing it, and it isn't really even possible to achieve internal rotation during a barbell row.

Shoulder rotation is the rotation of the humerus. It can be most obviously seen when the elbows are bent at 90°, because then shoulder rotation will change the direction in which the forearm points, as follows.

So, think about what internal rotation in a row would look like. At the top of a row, your elbows are close to your sides, just flared out a little. Internal rotation would mean trying to put your hands behind your kidneys. This is obviously impossible, because the barbell prevents any inward movement of your hands.

Then what are the pictured authors talking about?

What Ethier is describing as "internal rotation" actually just seems to be a lack of shoulder retraction. He's letting gravity keep his shoulders pulled forward, rather than squeezing his shoulder blades together. (He's also sticking his head forward a lot in the "bad" example, perhaps just to try to exaggerate the rounded appearance that he's trying to create.) You can see that in the "bad" image, the back of his singlet is visible above his shoulders, but in the "good" image it isn't, because he has retracted his shoulders, causing them to rise higher than his spine. 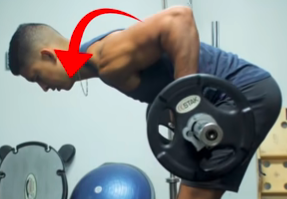 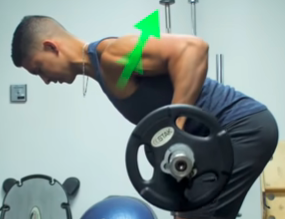 It should be noted that this is also a completely unrealistic barbell row demonstration, because he's using a weight that's so light that he can slowly pull it until his shoulders are hyperextended (elbows behind his back). This isn't normally possible in a row without using momentum, because the latissimus dorsi is not capable of hyperextending the shoulders, so it stops contributing as soon as the elbows reach the sides. Only the much weaker posterior deltoids are capable of bringing the elbows behind the back like this. For this reason, rows normally use momentum to bring the bar up to touch the chest. Using a weight so light that the posterior delts are able to lift it into hyperextension suggests that the weight it too light to be of any use to your lats or upper back.

As for Pheasyque, the posts from which these images were taken both caution against excessive internal rotation, which is not particularly likely in either push-ups or dips.

In the push-ups post, he says "No matter how hard you try, your shoulders always tend to internally rotate". However, internal shoulder rotation in push-ups can only occur if the push-ups are performed with arms out at 90°, which is not something you can just do accidentally. In a more common 45° or elbows by sides push-up, internal rotation would mean putting your hands behind your back, which is obviously impossible in a pushup.

In the dips post, he blames "excessive internal rotation of the shoulder" for shoulder "pinching" or discomfort. However internal rotation in a dip would require you to push your elbows outwards, and then push them forwards so that they are in front of your hands. That's also not going to happen by accident. The only difference in the shoulder between the "good" and "bad" dip images is that in the "good" image, the body is only lowered until the upper arm is horizontal, whereas in the "bad" image, the body is lowered until the shoulders are below the elbows. There's nothing harmful about going that low in a dip, it's just dependent on your shoulder flexibility how low of a position you can get into, and the exercise will become harder the deeper you go.

How you can improve your rows.

It isn't clear what the actual problem you're experiencing is, or whether it is actually a problem at all, since internal rotation is not possible during a barbell row. If you are concerned that your shoulders are "rounded" (protracted) at the top of the movement, then the solution is to focus on bringing your shoulder blades together as you raise the bar, rather than trying to pull them down.

Rows are normally done either:

Choice of pronated or supinated grip, more than anything else, will affect bicep involvement, with biceps being involved when the supinated grip is used.

Do you have very tight chest and lat muscles? These are the 2 main internal rotators of your shoulder. You can try stretching those while strengthening your external rotators.

I’m guessing what the image meant by internal rotation is referring to an anterior tilt of the scapula.

Engaging lower traps may be difficult if there is a lack of strength to combat your internal rotators in the first place. Don’t forget a more important function of your lower traps - posterior tilting of your scapula.

I’ll suggest performing isolated exercises for external rotation of your shoulder and lower traps, and stretching of your chest and lats.

A simple test: are you able to lift your arms overhead without arching your lower back or hiking your shoulder?

Not the answer you're looking for? Browse other questions tagged weightlifting bodybuilding powerlifting upper-body-workout barbell-rows or ask your own question.