How can we evaluate properly the work (energy) performed by the muscles?

I've seen many time people evaluating the work performed by muscles to move a certain weigth m over a distance d through a force F, for simplicity along the force direction, by using the physics definition of work:

Well, I have lots of questions about this topic.

Well, this equality is true if the weigth force is equal and opposite to the force F. But it isn't. If we get upright is because the force F we are providing is higher than the weigth force. Hence, the value we find for the work should be intended as the minimal work required to lift the weight, not the work actually performed by the athlete. Do you agree with me?

Coming back to the squat, while we are lifting the weight, for each fixed instant in which the athlete may assumed to be still o almost-still, his muscles are burning energy. In other words, I think his muscles are consuming energy not only during the movement, but also in each instant of time where the athlete may supposed to be almost-still. Shouldn't this contribution be inserted in the work computation?

Ps: It is not part of the question, but if you know some useful books/reference dealing with this topic in a rigorous and not approximate way, please tell me that I'm really interested in this topic. And I've found only general evaluations without a rigorous analysis.

There's a lot to get into here, but it's super interesting, and I'm in the mood for it.

Why it's a hassle to calculate

This will be terribly inaccurate for a few reasons. First of all, the formula being used. More about that in the next section.

But also because of some odd assumptions: They are assuming that they're squatting their entire bodyweight PLUS whatever's on the bar. But is all of your bodyweight being moved along the entire range of motion when you squat? Of course not! Let's say your range of motion moves the bar 1 meter down, and then up. Does your butt move a full meter as well? Do your knees? Do your feet?

Your butt travels in a sort of arc, so probably not the full meter. Also, anything below your knees doesn't gain any elevation during the lift at all, so you really can't assume that you're squatting your entire bodyweight.

I do agree that you could add some of your bodyweight to the total mass that's being squatted. Maybe... 50%? Your head certainly gets the full ROM, and so does most of your torso, I'd say. I'm not sure how our weight is distributed. Not to mention it's not the same from person to person anyway. But let's go with 50% anyway.

This formula is very nice, but it's more suitable for calculating work done horizontally or up/down a hill. The formula, as it stands, assumes that the potential energy of the object remains constant, or in other words, that its motion is perfectly horizontal. The full forumula has you multiply the whole thing by the cosine of the angle of the surface you're moving along.

But here's the kicker: When you're lifting weights, you're always moving the weight more or less vertically, or in other words, along a line that is perpendicular (90 degrees) relative to the floor. And as it happens, the cosine of 90 degrees is zero, so we would end up with a total work of zero.

The better formula in this case

...is the formula that simply has you find the difference between the potential energy of the object's starting and ending positions.

Here's the fun part! Imagine two stones. One is laying on the ground, perfectly still. The other stone, you are holding 2 meters above the ground.

Relative to the ground we say that the first stone has zero potential energy because "dropping it" doesn't really amount to anything. But if you drop the second stone, it will gain speed due to gravity. And a stone with speed has kinetic energy.

Now, if we take the stone on the floor, and lift it 2 meters up, we have performed work in order to change its potential energy. And the amount of work we have done on that stone is exactly the same as the difference in potential energy between its bottom position and top position.

Now, let's transfer that idea to a barbell.

Calculating work done during the concentric portion of the movement

Let's also assume a range of motion of 1 meter, and for this part of the calculation, we're only observing the concentric movement, starting at the bottom of the lift, and you're about to lift the weight back to rack height.

The potential energy of any system is given by the equation:

Potential energy = Ep = mgh, where m is the mass, g is the gravitational constant, h is the height of the bar.

And the work done during the concentric portion is how much potential energy you've given the system by increasing its height.

The calculation can be done as follows: 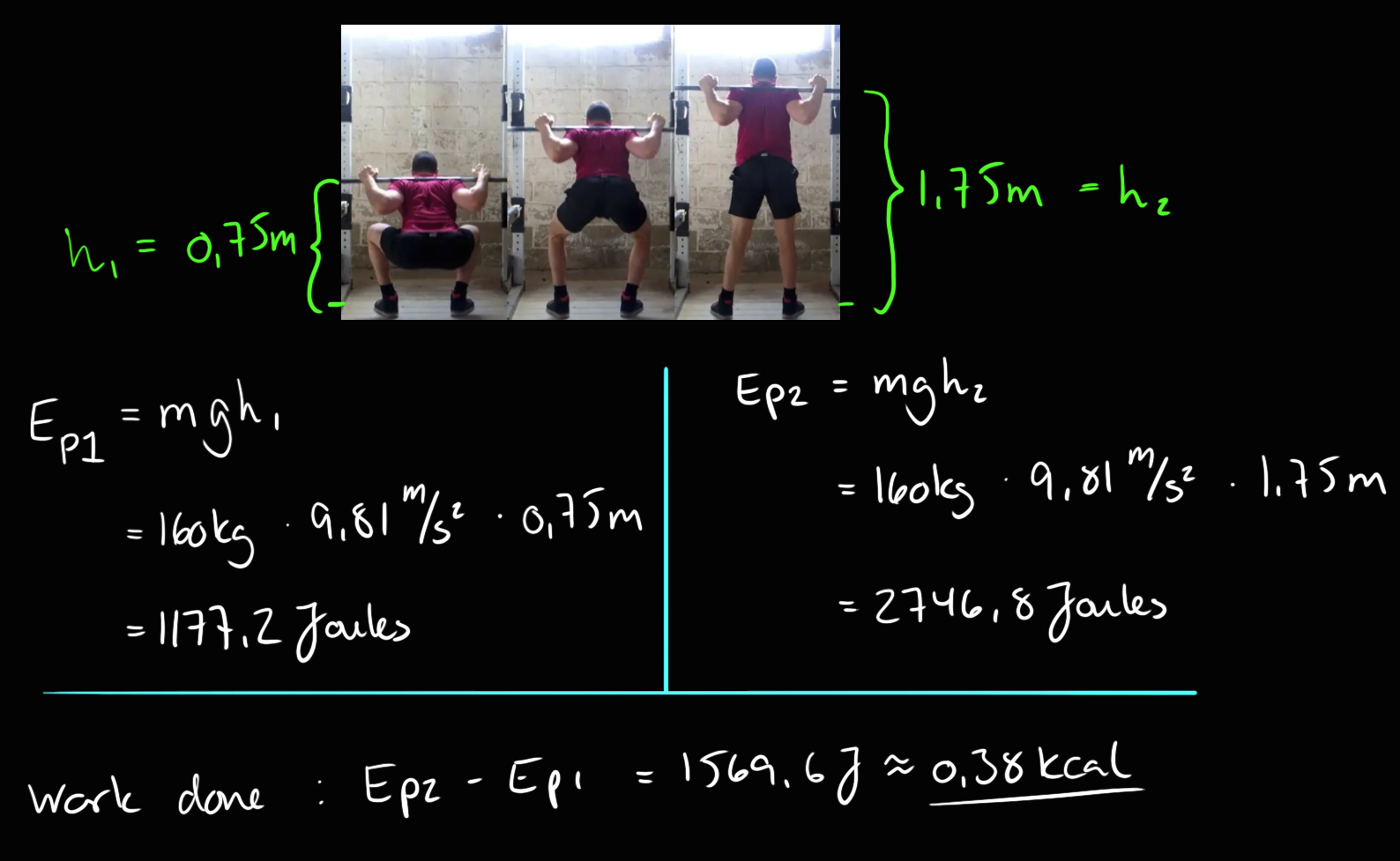 That's where it gets tricky. At least with my level of expertise. Calculating potential energy is such a bliss because you don't need to know the amount of force applied to the object. That's important, because during a human squat, the force we apply to the bar isn't even constant. We could calculate it, but then we would need to observe the bar's exact movement in order to extrapolate its acceleration function, which with F=ma, we could calculate the force function, and so on and so forth.

As you say, we certainly expend calories during isometric and eccentric movements too. But because muscles can expend energy without moving an inch, a lot of our formulas yield a net result of zero because they involve multiplying by some distance the system travels.

There's not a lot of difference in work spent with a curved or straight bar path. The reason for that is that we can break the curved path into two components;

The only time the latter is false is when the weight is being dragged along the floor, because you're working against high friction. But when the bar is on your shoulders, its only friction is against air, which is utterly negligible.

In physics term, is the force provided by the muscles conservative?

No. But from the perspective of the bar, yes.

You can move the bar off the squat rack, squat it up and down, take it over to the bench, do some reps, and take it back to the squat rack in the same place you found it, and the total work done on that bar will equal zero.

Without getting into the nitty gritty, this is because Work is a vector value, meaning it has a direction as well as a magnitude (which we measure in joules). And as long as the bar ends up back where it was, you can sum up all the directions it travelled, and it will add to zero.

Your muscles however have spent energy counteracting gravity the whole time, which is a non-zero amount of work.

Once we have evaluated the work, can we say that it is equal to the calories burnt during the exercise?

Yes! If you found a perfect way to calculate the amount of work done during an exercise, adding up both the concentric, eccentric and isometric work, you will have found a measure of Energy which has quite a few different units of measurement; two of which are joules and calories. They have a convertion factor such that 1kcal = 4184 joules.

You've probably heard of other units such as kilowatt-hours (kWh), which is the unit commonly used to measure work/energy in the context of electricity.

But muscles spend more than 1 kcal doing 1 kcal worth of work, so you can only ever get a lower bound on the actual amount of work performed by the muscle.

This is akin to how when you're heating a pan on the stove. Not all the heat energy is being put into the pan. Some energy escapes as heat into the room itself, and some energy is emitted as light, so you're actually spending money on energy that goes to places you don't want or need it. Muscles have the same problem but in different ways.

if you know some useful books/reference dealing with this topic in a rigorous and not approximate way, please tell me that I'm really interested in this topic

I would highly encourage you to start with an intro to classical mechanics. Learn the basics of motion, force, potential and kinetic energy, and work. Then supplement that with some literature specifically on biomechanics.

I can't really talk much about biomechanics, but everything I've talked about in this post has been lifted straight from the basics of classical mechanics. I've heard good things about University Physics by Young & Freedman. And it seems to be freely available. https://drive.google.com/file/d/1nXF3frUJbqjBtp4187YQq_l4K2aNTgUs/view

Looking at the detailed contents of the first chapter (Mechanics), it seems like the perfect book. 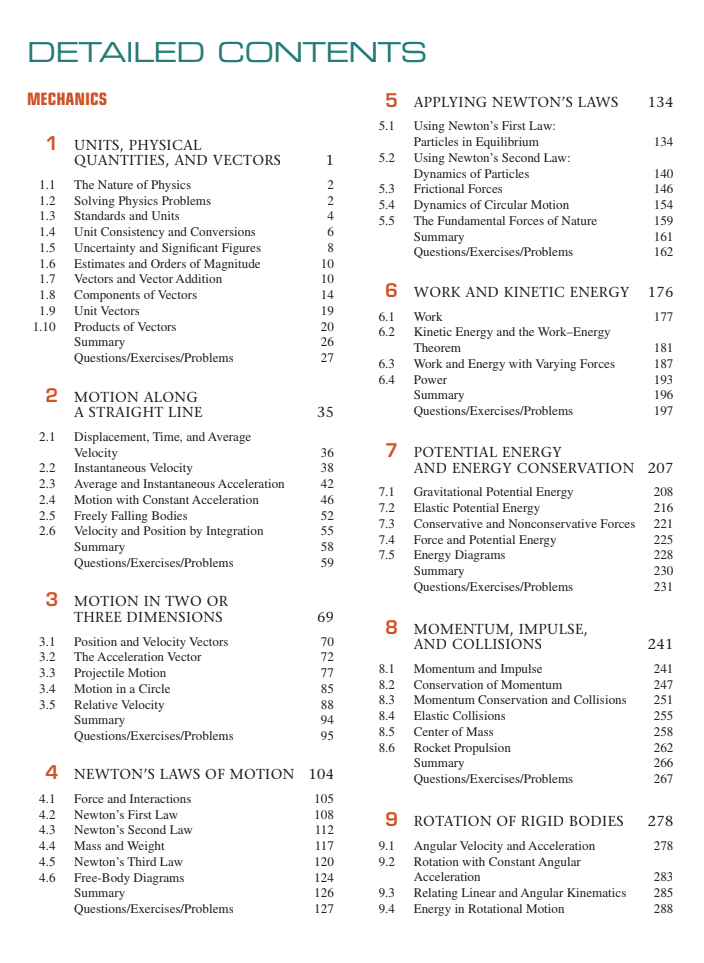 Keep in mind, this book is over 1000 pages long, but looking at this, I can see that the first 230 will probably do just fine for the purpose of this topic.

Not the answer you're looking for? Browse other questions tagged weightlifting bodyweight-exercises powerlifting energy or ask your own question.

13
How can I maintain my energy levels?
7
Using energy stored in the body vs eating beforehand
3
Muscles fibres, hypertrophy and energy systems
1
How to properly track weights on bodyweight exercises?
1
Is there a maximum energy limit an average human can possess?
1
Which is the role of biceps in a pull-up/chin-up?
2
How to rack/unrack the barbell properly in bench press
4
Bio-mechanical analysis of squat: torque on the knee and on the hip