Is there evidence that the effort-result-relation in resistance training is linear?

Is there any scientific evidence that the relation between training effort (measured as the amount of time spent training for the purpose of this question) and training result (increase in strength, increase in lean mass or increase in endurance depending on your goal) in resistance training is at least partially linear? Linear here means that a doubling/halving of effort would result in approximately a doubling/halving of result. I know that the relation is not linear at the high end (i.e. high effort and high result) without consuming "performance enhancing" substances due to the relation leveling off (i.e. the result approaching some threshold that is hard to overcome even with the highest effort), but the relation could still be linear at the low end or somewhere in between.

I'm only interested in actual evidence, not assumptions or speculation. If there is no evidence, that's fine - don't make it up. To be even more specific, let's assume both effort and result are averaged over relatively short timespans like weeks or months, not years or a whole lifetime. Averaging over shorter timespans probably makes no sense due to the result being too small to be measured with certainty, and averaging over years or more might contaminate the data with the results of unrelated influences like aging, injuries, long pauses, etc. . Some statistical noise is fine - if the evidence indicates a roughly linear relation, I would be interested. Ah, and of course I assume that the candidates are eating adequately to support their results - it is obvious that without adequate protein intake, no amount of effort will produce measurable results. And to clear up one final possibility of misunderstanding: I'm talking about marginal efforts & results to borrow a term from economics. What counts is added effort and added result; whatever happened before you start measuring or after measuring ends is irrelevant.

Is there any scientific evidence that the relation between training effort (measured as the amount of time spent training for the purpose of this question) and training result (increase in strength, increase in lean mass or increase in endurance depending on your goal) in resistance training is at least partially linear?

This is a bit to unpack so I'll do so in rather broad strokes. There will exist differences between strength, lean mass, and endurance. However, for the development of lean mass, there is a range that is partially linear. It's a short range. When you look at an overall model of sets per week (volume) to lean mass gain, the model is actually a curve of diminishing returns.

Two great videos from Jeff Nippard touch on this topic. They both revolve around "How much should you train?" but the papers cited are all valid literature: How much training volume do you need? and Is workout volume actually killing your gains?

Both videos refer to a graph such as the one below. The linear section is where you are undertraining. In that portion, doubling your effort may indeed double the results. However, quadrupling your effort may not as there is a point of of optimal training and a fall-off into overtraining. The two videos linked go into detail with attempts at trying to assign quantitative data to this curve with respect to lean mass. 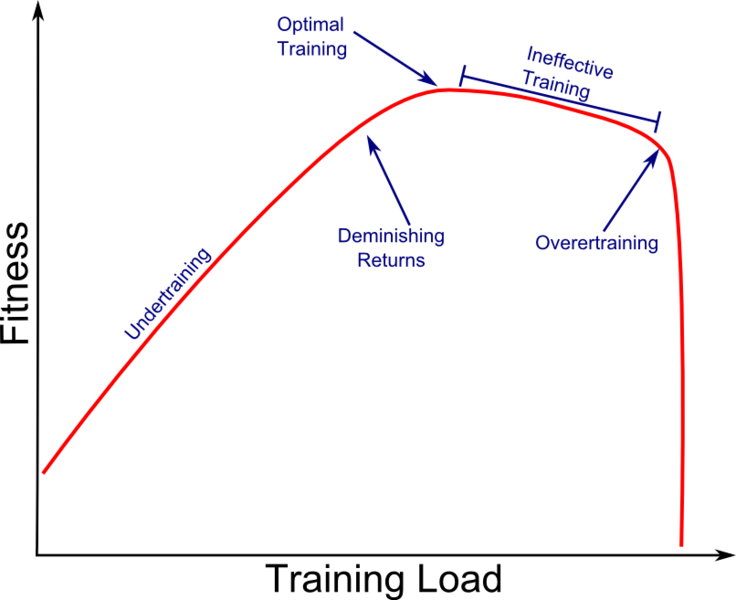 Not the answer you're looking for? Browse other questions tagged strength-training resistancetraining or ask your own question.

14
What's the minimum amount of strength training that will yield a measurable benefit?
8
Is there an alternative way to warm up for lifts that is less tedious than gradually increasing the set weight?
2
What are the strengths and weaknesses of shorter bouts of resistance training?
7
what's the reality that keeps progressive strength training from being constant?
3
How to find someone that can direct my training to a safe path, what is the name of such profession and where should I look?
5
Are there studies on the number of sets that should be performed per exercise?