Here is a scatterplot matrix of elapsed times for the overall, swim, bike, and run legs of the 2009 Ironman Championship in Kona. 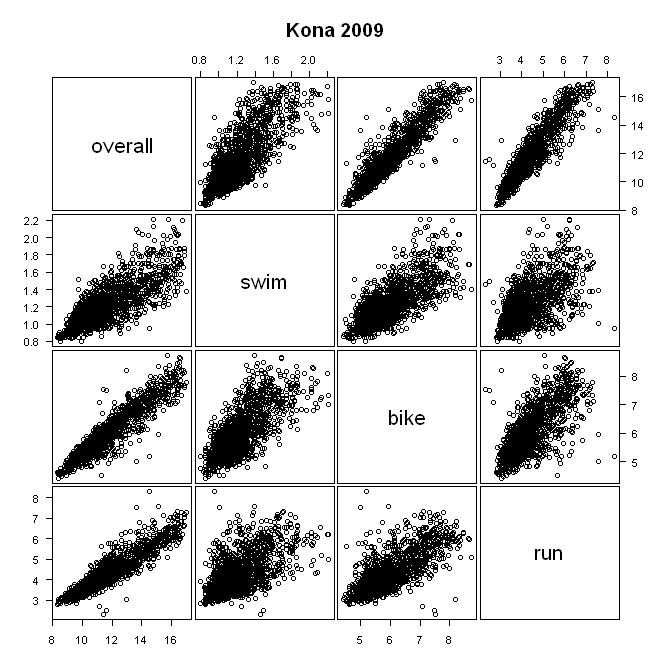 Obviously, while the correlation is imperfect, it is still relatively strong (r(swim, bike) and r(bike, run) are both around .75, while r(swim, run) ~ .5), so if you're a fast cyclist you tend to be a fast runner and a fast swimmer. Fast people are fast, no surprise. The thing that mostly determines bike time on the Ironman Kona course is power to aerodynamic drag (since the course is pretty flat and usually pretty windy). On the other hand, the thing that mostly determines run time is power to weight. The commonality is power: power while biking is related to power while running. Likewise, power while biking or running must be related to power while swimming. However, this is for a selected group of athletes: those who qualified for the Ironman Championships and finished all three legs in one day. I am more interested in "stand alone" events.

We have bicycle power meters that tell us power output while cycling, and a rule of thumb that tells us that on firm flat ground runners expend around 1 kcal/kg/km. Although there is a fair amount of variation in running economy, that latter rule of thumb combined with an estimated gross efficiency of .239 can give us a new rule of thumb that relates running speed to power: running speed in meters/sec is roughly equivalent to watts/kg.

My question is this: is there an equivalent rule of thumb that would give an estimate of power while swimming? I understand that there is much more room for variation in swimming economy than in running economy -- I'm just looking for a rule of thumb.

Update: McArdle, Katch, and Katch (2005, "Essentials of exercise physiology", 3rd ed.) claim that there is a fair amount of variation in energy expenditure among swimmers, and that it depends on skill level, sex, and type of stroke (breaststroke requires the most energy expenditure while the crawl requires the least). They claim that sex matters because females tend to be more buoyant than males and their mass distribution is different so they tend to swim "flatter" in the water and thus have less hydrodynamic drag. Even with all these caveats, they claim "it takes about four times more energy to swim than to run the same distance. In contrast to running, a swimmer must expend considerable energy to maintain buoyancy and overcome the various drag forces that impede movement."

In addition, Barbosa et al. (2006, "Evaluation of energy expenditure in competitive swimming strokes", Intl J Sports Med 27:894-899) show a couple of regressions that show the relationship between swimming speed and energy expenditure for a group of elite "international level" swimmers. I am looking for the relationship between power and swimming speed (or a similar metric) for not-quite-so-elite swimmers.

It's a difficult thing to answer that, since there are a couple of factors that are constant (Such as drag of the water), and some that aren't (Efficiency of the swimmer).

The reason that breaststroke is slow is because the majority of the body is underwater, and thus facing drag. You can't get on the top of the water and plane like you can in freestyle and to some extent backstroke.

However, Philip Skyba (Founder of physfarm and triathlete coach) did come up with an equation to approximate power output while swimming, however it's not really a "rule of thumb", as it relies on some estimations of propelling efficiency that are unique to the individual, but constant FOR that individual. So you could get a pretty good idea of your own power output, but you'd have to remeasure for each individual.

Also, because power output is related to drag, the faster you go the more power you have to exert for lesser and lesser gains, because more energy is going to simply overcoming the drag factor.

The PDF writeup for the equation can be found here: Philip Skyba swim power equations

Youh may want to look at Swimming Faster by Ernest W. Maglischo written back between 1980 and 1983. It has an entire chapter and if I remember right three or four pages of reference related to energy metabolism as it relates to swimming. There is a much better book less scientific more geared to increasing swim efficiency, it is called Total Immersion, I forget the author. It is based heavily on coach Bill Boomer's ideas about buoyancy. He started coaching small DIII teams in New York and ended up as a Olympic coach.

A mistake that is made when comparing swimming to sports which you have to carry all your weight like the rest of a triathlon is it is buoyancy and streamlining (like in cycling) that make the difference. If you can float and "press the T" a short guy like me can float right on top of the water and streamline like a crew shell, betting out anyone trying to swim more vertically.

That said there should be a rule of them about an individuals buoyancy/streamline. 4 times as much energy is probably not that bad. For shorter distances I've always have heard 3 to as little as 1.5 times as much energy need to swim the same distance as run, again depending on efficency.

Not the answer you're looking for? Browse other questions tagged running swimming bicycling power or ask your own question.

6
What are equivalent swimming and running speeds?

4
Sprint training for long distance
0
Running and swimming in the morning combination
2
Running speed versus running power - is there a difference?
5
Feeling thirsty while swimming
7
Drills for sea swimming
8
Why is my swimming fitness so much worse than my cycling and running fitness?
8
How do calories per distance vary with speed: walking, running, and sprinting?
5
Does running on trails require substantially more energy than running on roads?
0
Swimming calorie calculation by distance vs time