I do a fair amount of weightlifting; in particular heavy compound lifts power-lifting style. I also compete on a target pistol team. Over the years, I've heard a number of coaches and marksmen recommend that serious shooters stay away from heavy lifting because it could affect arm stability/precision when holding the pistol.

The physical requirement for this sport is to be able to hold a 2 lb pistol (with one hand/arm only) at arm's length with elbow locked as steady as possible for 5-10 secs.

So my question: are these two sports at odds? Can someone give an explanation for why heavy lifting might (or might not) compromise my ability to hold the pistol as steady as I could if I didn't lift?

To understand how these two sports might conflict, we need to delve deeper into how muscles are controlled.

Chad Waterbury had this nice picture showing how a motor unit touches several muscle fibres. I suggest those who don't know what motor units are start reading up a little bit :-) 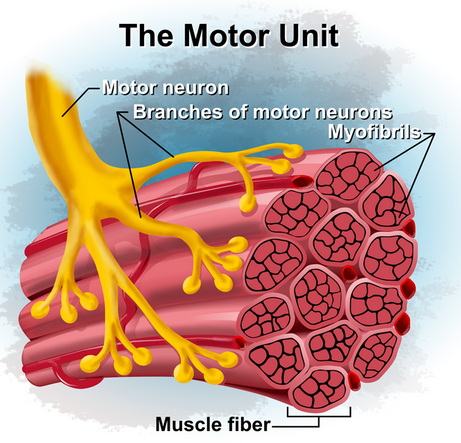 Taking the biceps as an example, this muscle has about 200 of these motor units to stimulate all the muscle fibers.

But you want to contract your muscle, they don't all go fire at the same time. This is due to the size principle, motor units of the smallest size will be recruited first. For a more detailed explanation, I can recommend Human Physiology: The Mechanism of Body Function 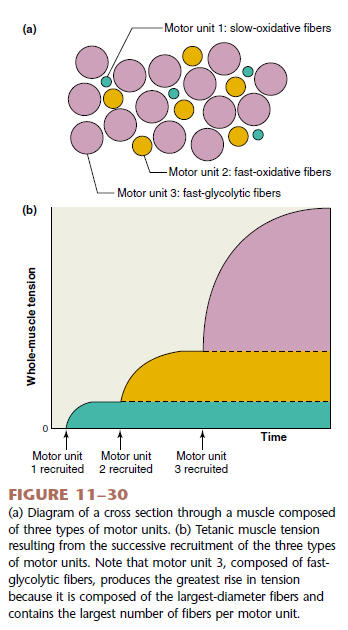 As this picture shows, your muscle fibers are divided into roughly three groups. First the green ones are recruited: these are your Type I fibers, meant for endurance. Then when you start to recruit more motor units (by increasing the force of the contraction), you recruit the yellow ones: these are your faster Type II fibers, but as you can see they aren't the strongest muscle fibers. If you would contract even harder, you would start recruiting all your motor units (well as much as possible) and you reach your maximal power output.

What does this have to do with shooting?

If you lift a lot of heavy weights, you're mostly training that last group of muscle fibers. When you do this enough, you're muscles start to adapt to become better at it. However, my hypothesis would be that this influences how your muscles recruit muscle fibers.

Now if keeping a gun stretched out requires 20% of your biceps forces, that means it has to recruit the yellow muscle fibers. But since they work in an on/off kind of way, they'll recruit a surplus of fibers and thus produce more force than required, so you have to counter it with your triceps. But that muscle is also a lot stronger, so your muscles have a very hard time at load balancing to keep your arm steady!

Furthermore, weight lifters aren't trained for fine-grained motion, so regardless of whether my hypothesis is entirely correct, you're training your muscles for the wrong kind of exercise. So yes, I'd say they are somewhat conflicting

Since I posted this question (2 years ago), I've continued to train with heavy compound lifts and to work on my marksmanship. The latter has steadily improved, and I think I can safely claim that, in the big picture, becoming stronger has not affected my steadiness. I am, of course, a single data point, but both my strength and my shooting scores have continually improved over this time.

However, I've noticed that if I lift that same day I shoot, then that definitely does affect steadiness. After a lifting session I'll have a slightly elevated heart rate and general "buzz" for quite some time, often hours.

Heavy lifting can cause a muscle-binding effect and limit your flexibility, making it difficult to get into correct positions for shooting or effect your stability. The sports aren't specifically at odds, but you do want to make sure that you don't work to the point of limiting your mobility with heavy lifting.

I know a guy who could not shoot for this very reason, his shoulders had limited range of motion due to excessive exercise (at work, not in a gym) and he had to cut way back on what he was doing at work so he could get back full mobility in his shoulders.

It takes a lot of work and a long time to get there, and you should see early warnings far before you get to that point. Just make sure that all of your exercises, especially in the shoulders and arms, are exercising your full range of motion, and cut back if you notice a decrease in that range.

Specifically, with what you're describing, along with the exercises for stability, I would say that you're in no danger of this becoming a problem. I'm primarily stating that it is possible, without appropriate care to maintain balance and full range of motion.

Not the answer you're looking for? Browse other questions tagged weightlifting muscle-endurance stability or ask your own question.

1
Weight lifting and dental care
6
How does frequency affect recovery, controlling for intensity and volume?
5
Will weight lifting affect speed and flexibility?
3
How to construct workout with heavy lifting and not getting bulky?
2
Safety in heavy landmine squats and presses
3
Does heavy metal music increase strength?
0
Supercompensation theory and lifting principles