What is the optimal height of the bar off the ground for dead lifts?

I'm still using universal weights (one day I'll move onto Olympic) and at most 25lb plates. This results in the bar being lower to the ground when performing dead lifts. I know dead lifters change height of the bar (using platforms, rack mounts, etc.) when training...so my question is: what is the optimal height of the bar to get the most benefit from dead lifting and what does a lower OR higher bar benefit? I'm at about 320lbs x 5 reps max right now - 400lbs+ via a rack (actually cement blocks). 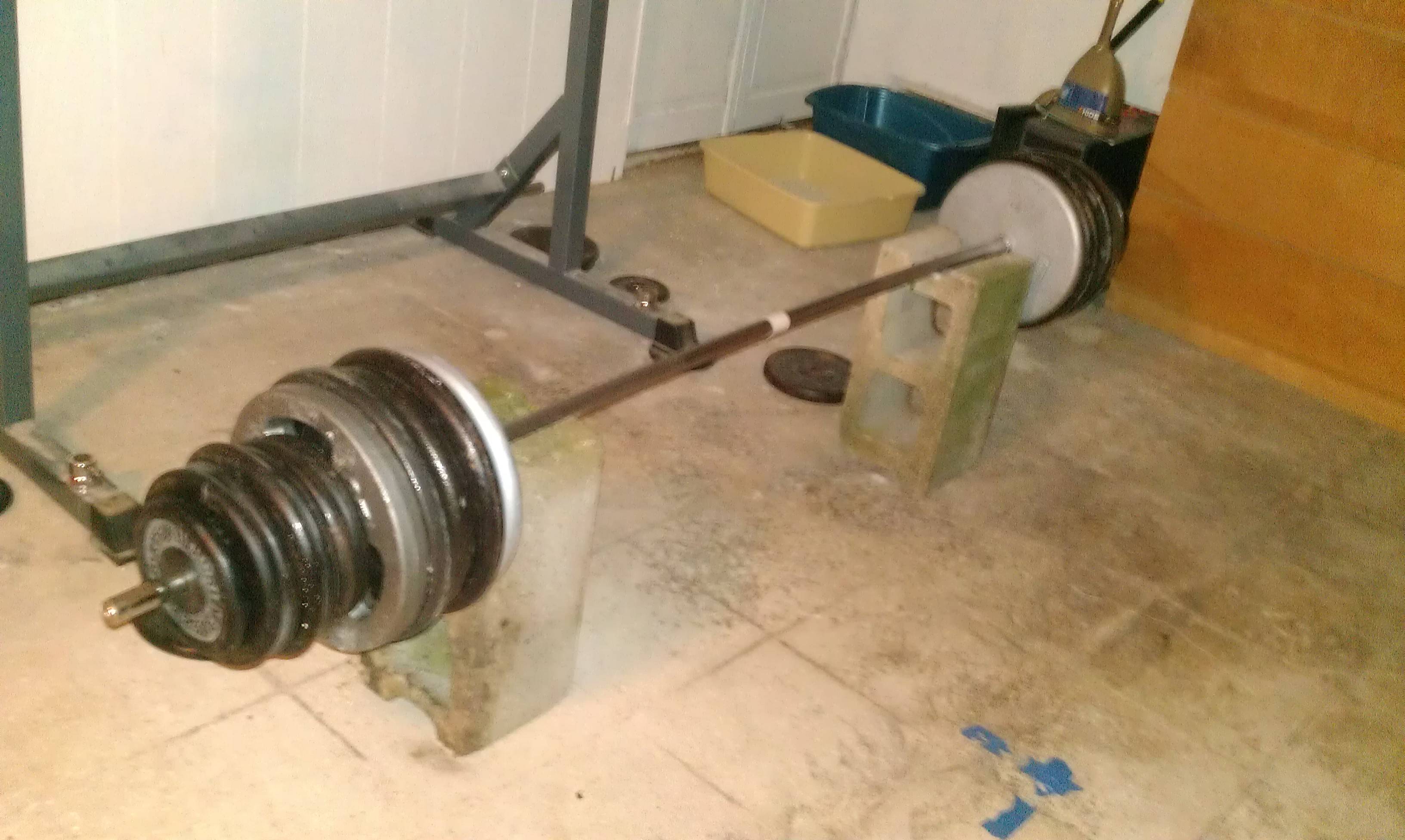 A higher start means you can lift more weight, since you're pulling through a reduced range of motion. The inverse is true of a lower start, of course. An additional concern with deficit deadlifts is the increased need for mobility and flexibility, without which you'll be starting the pull from a disadvantageous and dangerous rounded-back position.

I wouldn't argue that any of these starting positions is "optimal" in a truly objective and general sense, but the standard height is to be preferred because of its universality as well as its Goldilocks-style demand for "just enough" from both mobility and strength. Veering too far either higher or lower makes either the mobility requirements too rigorous or the strength requirements too weak.

If you are able to keep a safe, flat, athletic spinal position while pulling off the floor, and you're making progress, I say keep on going. You're doing a little more than standard deadlifters, and thereby getting a little stronger and demanding a little more mobility than them. That's awesome.

The purpose of deadlifting is to get stronger at lifting things off of the ground. Since objects may be at different distances from the ground, you benefit from lifting from different heights. Competitive deadlifters might focus on the height of the bar with olympic weights, but that distance is arbitrary otherwise.

Lowering height develops the back muscles and flexibility more. You have less leverage in this position, so you may need to lower the weight. Raising height allows you to develop more strength where you have more leverage because you can use a higher weight that you usually could not lift from a lower position.

A final change to consider if you ever get bumper plates: Lowering the bar works the muscles in an eccentric fashion (lengthening them while contracting). This builds strength, but can also increase soreness. So, many people drop the weight from the top when doing their heavier reps.

400 lbs is a legit deadlift for anyone. You must be doing something right.

The answer to your question depends on your current goals in training. A deadlift done for competition is always done using 450mm plates with a 50mm diameter hole in the middle of the plate. The height of the bar is dictated by the width of the plate. Those are the IPF/IWF standards for plate dimensions.

When you are training for a competition, or just for a stronger deadlift, you might have problems with a sticking point. That's the point where you have the most trouble with the lift.

When I started lifting I lacked range of motion around the hips for a deadlifting motion, so I had (in my case dumbbells) raised up so I could do them with good form. However, after a few weeks I just put them on the floor as my range of motion had increased sufficiently to allow me to do it from lower.

Start off with just a single weight plate on each side with the barbell on the floor and either have someone video you or watch you so you can see if your form is good enough with the lower height. Then work your way back up to the weight you were at before.

13
What is the correct form for a deadlift?
10
What is the primary difference between mixed grip and overhand grip for deadlifts?
8
What's a good intermediate/advanced squat routine?
1
Is this enough?
2
What are the different repetition ranges and for what use?
2
What is the correct workout order? (I.e. warm-up, mobility work, lifts, stretches, cooling down)
2
Dead lift - Is it better to pick up racked weight or start from the ground?
5
What is the proper way to grip a bar for heavy deadlifts?
1
What is the optimal length and amount of sessions per week for optimal muscle gain?