What are the primary muscles worked when hitting a Heavy Bag?

What are the primary muscles used while hitting the heavy bag (boxing focus sessions as compared to kickboxing where kicks are involved). And how do you improve the overall hitting/power of those strikes from accessory exercises? 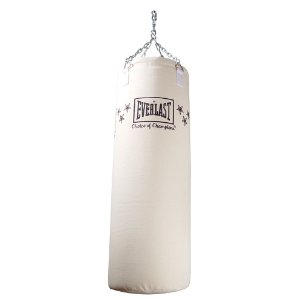 Start at your head, and go to your feet. That's the muscles involved. :p

Seriously, a good punch will involve most of the muscles in the body. The primary single movers in a punch are going to be

You could throw a punch just using those muscles, but it won't be a hugely powerful punch (Think a jab in boxing). The triceps straighten the arm, and the delts/pecs move the arm "forward" and in towards the center.

To that, you can add the muscles of the abdomen (abdominals and internal/external obliques) for rotation in the execution of the punch, muscles of the leg (calves and hamstrings/quads) used for driving and transmitting ground force through the punch, forearm muscles for rotation and stabilization of the lower arm, and lats/biceps for oppositional force and arm retraction after the punch. Clenching your jaw at the point of impact will tense/stabilize and add force, although a permanent clench is counter productive.

As the boxer settles from movement/shuffle, the feet get planted. The rear leg starts hip rotation and gives a "push" from the feet upwards, involving the calf and thigh muscles. As the hip and torso continue to rotate (obliques and abdominals, some lats) the upper body continues the rotation, and the arm starts to extend out (pecs/triceps/delts), and the hand/lower arm rotate so that at the point of contact, the fist is palm down as opposed to facing inward as in a typical sparring/protection stance.

As far as hitting power, any basic weightlifting routine will work all the muscles involved, as most of them are primary movers for the core exercises such as pullups/dips, squats, situps and rotational exercises (abs and wood choppers for example). Where a LOT of the power comes from is simply technique, learning how to plant and rotate, keeping the arm as relaxed as possible until point of impact, things of this nature. You could have one person that can outlift a second person by a considerable margin, but not be able to punch as effectively because of a lack of technique.

Not the answer you're looking for? Browse other questions tagged training boxing or ask your own question.

5
Can one prevent bleeding knuckles while boxing?
5
Will a boxing bag as my primary workout be okay for my cardio and weight loss?
7
Will frequent training on a boxing bag have the same inhibiting effects for mass gaining as lots of running?
3
Improve Sled Pull for Mountaineering
3
HOW should I do running intervals for martial arts?
7
Change my routine to use strength exercises that are also cardio exercises?
5
How often and how long should yoga be practiced for optimal health benefit?
4
Gym routine for advanced taekwondo practitioner
2
What are some good strength exercises for different skiing practises?