Do different paddle grips have an effect on performance?

I joined a dragon boat paddling team a few months ago and have been paddling out on the water using club equipment and gear. I have noticed that others who elected to purchase their own paddles have either a T-grip or a palm grip.

The T-grip it just a plain cylindrical handle that goes in the palm of your hand and is perpendicular to the shaft of the paddle. The palm grip is, in contrast, a little stubbier rounded rather than extended like the T-grip.

Do these different grips make any difference in how someone paddles in terms of technique or how the physical muscles are engaged in the hand, wrists, and arm? 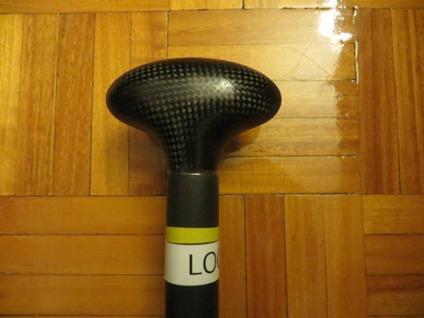 The biggest factor of the grip is whether you'll twist it off or snap it off. The wooden one you posted on the left is at a high risk of that happening. The carbon fiber one on the left could still be at risk of twisting, but at least it won't have part of it snapping off. Ideally, it'll be a single piece, rather than having the grip glued to the shaft.

There are many opinions on technique. Some coaches will hold that there is one right way of doing it, and that everything else is wrong. However my best coaching came from a friend (who's now a U-23 world champ) who suggested several options qualified based on what worked well for her, and suggesting modifications based on my body type. That ended up being confounded by the fact that I could really settle on what worked best for me on OC-1, but when I went back to DB it ended up being more important that I fall in line with how everyone else was paddling, and I also needed to make adjustments so I wouldn't punch the guy in front of me in the back of his head while I reached. Incidentally as far as grip goes, I always take a thumbless grip, even though the convention is a thumbed grip, and that's something the coaches were always willing to compromise on - so evidently none of them thought the grip specifics mattered all that much.

I just confirmed the answer with said U-23 World Champ. She said it doesn't make a difference, it's just a matter of comfort or preference, with a caveat that there is a coach who insists on the T-Grip, but there isn't a practical reason for that, again, just coach's preference. If everyone on your team has a particular grip, you might want to ask and go with that, simply because of the nature of a team sport, but other than that, pick whichever one you find more comfortable.

I agree with the gist of the prior response -- it is mostly a matter of personal preference. I coach and I never tell paddlers which to use. I would add that the T grip can make any problem with blade angle in the transverse plane (whether the power face is turned you or, more rarely, away from you, rather than straight back) easier to notice and correct. I personally find the palm grip more comfortable and that is what I usually use.

Not the answer you're looking for? Browse other questions tagged grip or ask your own question.

6
When doing barbell rows should I have an overhand grip or underhand grip?