Why does the suprailliac skinfold body fat method depend on age?

Skinfold measurement charts like the Accumeasure one shown below for suprailliac measurement have the same caliper measurement representing different body fat %s in different age groups. Maybe other skinfold methods, or even other body fat % methods do to? 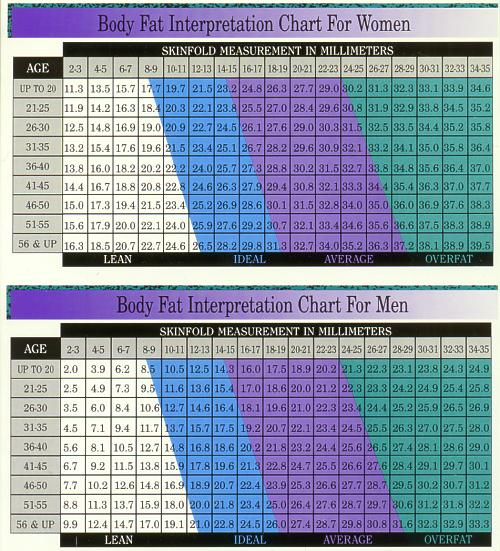 I can appreciate the skin gets looser with age, but can't see that affecting the measurement, if this diagram below is correct:

Do we accumulate fat in other, healthier places than is predicted by the suprailliac as we age? I say 'healthier' because the colored bands in the chart above shift their ideals as we age.

Let's take a look at what this method does:

What you measure is the thickness of the subcutaneous fat layer on your suprailliac. That does not give you your total body fat percentage directly because body fat distribution varies from person to person.

So what you need is an estimate of your total body fat percentage in relation to the fat on your suprailliac. To do this statistical models are used. So a group of people has these measures taken and their body fat percentage measured (water weighting, x-ray, etc) and the most likely formula of the relation between the measured quantity and body fat is searched (simplified description).

These models which relate skinfold thickness to body fat percentage often include more variables than just one skinfold. Most are sex specific, some take up to 7 skinfolds, bmi, hight, waist circumference, and some, like the Accumeasure chart, use age as an influence on body fat distribution.

So to sum up: The idea is to relate an easy measurable quantity (skinfold thickness) to a hidden one (body fat percentage). This relation is most likely unique to each person depending on genetics and lifestyle. So the best that can be done is to gather enough samples to allow a statical estimation of the relation which will give an error depending on the statistics you gathered and the person that is measured.

And now to the wikipedia:

Some models partially address this problem by including age as a variable in the statistics and the resulting formula. Older individuals are found to have a lower body density for the same skinfold measurements, which is assumed to signify a higher body fat percentage. However, older, highly athletic individuals might not fit this assumption, causing the formulas to underestimate their body density.

Meaning: Old people are found to have a higher body fat percentage (statistically) for the same skinfold thickness, but that's not true for all old people (hence statistically).

Regarding the shifting ideals: I can't find it anywhere right now but I read some where that with age a higher body fat percentage is found to be healthier. I think it was on a discussion on bmi where they found that a the bmi limits don't hold for old people and that the ideal bmi for them should be higher (independent of the point that bmi is a crappy measurement).

Sarcopenia - The charts take into consideration the loss of muscle mass with aging (sarcopenia). Between the ages of 25 to 60 years old the rate of loss is 0.5-1% loss per year. After the age of 60 this rate can increase especially in the sedentary.

It seems to me that a very small, skinny person could have the same thickness of fat below their skin as a very tall or heavy person. They would have the same caliper reading and consequent body fat percentage on the chart, but have very different proportions of fat on their bodies.

Not the answer you're looking for? Browse other questions tagged body-fat measurements or ask your own question.

15
How accurate is the Navy Body Fat Calculator?
10
How much does body fat affect body temperature?
1
sweating and body fat
1
What is the minimal body fat percentage with no risks?
7
Why does the body burn muscles instead of fat in a calorie deficit body?
6
Most accurate home body fat test?
1
Body Composition Analyzer - How to calculate the fitness score?
1
Ideal BMI / Body & Vicelar fat for my body measurements