How does the founder exercise work?

I sometimes experience discomfort and pain in the lower back.

I deadlift a heavy set once a week. This does not seem to be helping. And why should it? It makes my lower back able to stabilize against very heavy loads for a very short period of time. My daily life probably involves stabilizing against a light load for very long periods of time instead (could this be called postural strength?).

There is a bodyweight exercise called the founder that I believe will help. I will start doing this once a day.

But I would also like to know; why and how does this exercise work? Or does it not work? Is it roughly equivalent to a barbell only romanian deadlift?

My theory is that in order to avoid back pain one must have great muscular endurance in the lower back and flexibility and muscular endurance in the hamstrings. One way to achieve this would be do a lot (say 100 reps a week) of very light deadlifts or RDLs. The founder is roughly the same as a deadlift or RDL where one uses the arms as weight instead of a bar. A few set of heavy deadlifts a week does not cut it. What is needed is muscular endurance not strength. That does not exclude heavy deadlifts. They are useful. In the case I may have to lift eg. a washing machine.

I deadlift a heavy set once a week. This does not seem to be helping [my posture and back discomfort]. And why should it?

Deadlifting and squatting heavy also adds muscle to the back that changes your default posture drastically for the better.

Most people who are just beginning to deadlift often experience more lower back soreness than they've ever imagined. Instead of leaning into the experience, pushing through for a few months, and developing a strong back, they slow down, back off, and therefore never get the benefit of a strong deadlift. It takes a while for the postural benefits of heavy squatting and deadlifting to kick in, but they're definitely there.

It's of course possible to be quite strong and experience back pain, but the relationship of deadlifting to that problem is different for strong versus weak people. Weak people need to get strong and re-evaluate; strong people need to stay strong and develop practices like daily yoga/warm-ups/mobility circuits.

Without knowing how much someone is lifting and how seriously they're taking the practice, it's difficult to know why they aren't feeling the benefits. Your question history makes me wonder if you are over-analyzing the situation, looking for easy alternatives to a hard practice that would work if you just let it. But you've also been lifting for over a year, so hopefully you've reached some serious strength benchmarks and you just need a mobility practice.

In case someone with actual nonspecific low back pain read this thread I need to inform you. Not being completely convinced by Dave's argument that increasing 1 RM deadlift will help you I have done a literature search.

First of I will mention that altough it is often claimed by physioterapists that tight hamstrings cause lower back pain, there seem to be no evidence for this. On the contrary a large study (n=600) (1) found that “Tight hamstring- or psoas muscles could not be shown to correlate to current back pain or to the incidence of back pain during the follow-up period.”

There are however several studies that shows that lower back pain is caused by poor endurance in lower back muscles. The Biering-Sorensen test consist of maintaining a horizontal position with arms folded across the chest in a glute-ham raise machine for the longest possible time up to 240 seconds. 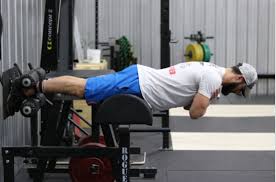 Several studies have found that subjects with nonspecific low back pain have significantly shorter holding time. In a study (2) with 928 subjects Biering-Sørensen found: "The main findings were that good isometric endurance of the back muscles may prevent first-time occurrence of LBT in men. Weak trunk muscles and reduced flexibility/elasticity of the back and hamstrings were found as residual signs". That is to say isometric endurance in lower back is important, strength in lower back or flexibility is not.

Demoulin et al.(3) shows that maintaining the Biering–Sorensen position for less than 176 seconds, predicts low back pain within the next year and greater than 198 seconds predicts absence of low back pain.

As Dave mentions increasing maximum strength also increases endurance, at least to some extent. The big question is if 3 minutes 18 secs on the Biering-Sorensen test is too long a time to be influenced by 1 RM deadlift. I guesstimate a 1 RM deadlift to take 2 secs. Therefore the equivalent of a passing score on the Biering–Sorenson test would be ca. 100 deadlifts. I doubt someone that only trains 5 reps or less can do a 100 deadlifts with say an empty bar regardless of their 1 RM deadlift.

I have also found some studies that shows that increasing strength in lower back by deadlifts reduces lower back pain: (4, 5). However these seems to be of lower quality. The first one has only 30 subjects, the second one 70.

In the absence of conclusive knowledge I think the safest is to hedge ones bets. That is one should increase 1 RM deadlift by doing sets of 5 at 85% of 1 RM but one should also increase static endurance in lower back by training specifically for this. How to best do this I am not sure about. I think holding the horizontal position in the glute-ham raise machine for increasingly long times may be the best choice. Doing the founder exercise may be a viable alternative in the absense of a glute-ham raise machine.

(2) Biering-Sørensen Physical Measurements as Risk Indicators for Low-Back Trouble Over a One-Year Period.

(4) Welch et al. The effects of a free-weight-based resistance training intervention on pain, squat biomechanics and MRI-defined lumbar fat infiltration and functional cross-sectional area in those with chronic low back. Download

Not the answer you're looking for? Browse other questions tagged bodyweight-exercises yoga back-pain or ask your own question.

3
Does weight loss and exercise make back pain go away?
6
Which collection of specific exercises can be used to completely substitute Deadlift?
3
What to do if you have backpain due to many hours of sitting although going to the gym between those hours?
2
Bodyweight exercises to stimulate fast-twitch muscle growth
2
Mechanism and recovery of lower back pain?
4
How should I train strength if I want to stay pain-free and have good mobility?
2
Are the basic barbell lifts not enough for the “core”?
1
Is it bad if i don't have pain after exercise?