Effects on muscle growth of not taking rest days

Is there any evidence that humans suffer muscle loss or inferior muscle growth when working out 7 days out of 7?

Or is the idea based on the evidence suggesting that growth happens during rest, thus common logic would assume not resting impairs muscle loss?

So, has it been tested?

Yes. Biochemical changes that occur following the application of an exercise stimulus were originally investigated by Nikolai N. Yakovlev, his first paper on the subject being published in 1955. His discoveries led to the modern theory of super-compensation, which describes the process of stimulus, fatigue, recovery, and advancement (illustrated below). 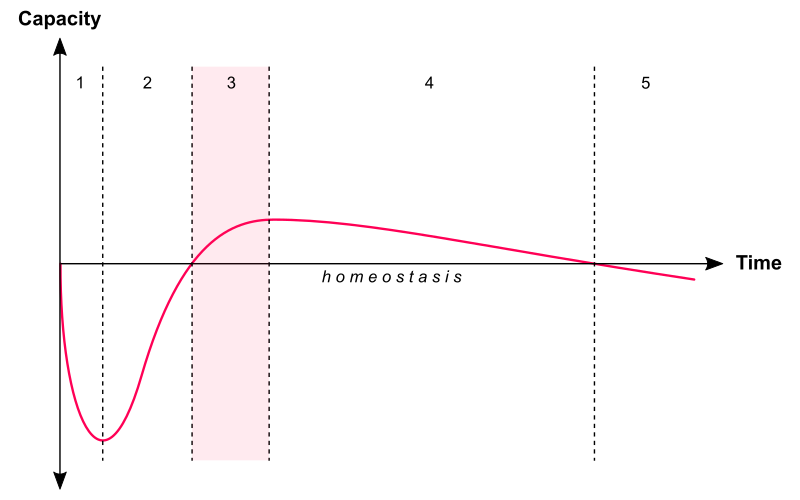 Following a training stimulus, capacity is temporarily reduced at (1) before recovery begins at (2). Recovery is complete at the line between (2) and (3), then super-compensation begins at (3). During (3) and (4), capacity is greater than it was before the application of a training stimulus, and therefore the period during which want to train again. This is, of course, a conceptual model, but the biochemical processes associated with these stages is now well understood.

However, this does not answer your question directly, since the amount of muscle fibre damage resulting from any bout of exercise is so heavily dependent upon the volume, load, and focus on contraction.

Yes, it is theoretically possible to work out every day and still grow. Indeed, this is what physical labourers have always done, albeit with a statistically high rate of overuse and injury. However, this depends on the bouts of exercise being minor enough so as to allow us to fatigue, recover, and super-compensate within a space of less than 24 hours. Thus, our notion of what comprises an exercise bout has to reflect the low volume, limited eccentric contraction regimen that would make that possible.

I hope that makes sense.

Great answer by POD, but I would like to throw in my two cents as well.

I would more lean to yes and no, and there is a reason. When working out, most people target specific muscle groups on certain days and have a cyclic routine throughout the week. If this is the case, in theory you won't be working out the same parts of your body everyday. So if your routine was like something below, you could target certain muscle groups while resting others.

However, I do suggest that you give yourself recovery time and do a 4-5 day-a-week routine. Your body builds better on a consistent plan, and staying consistent 4 or 5 days a week is a lot easier than 7 days a week.

There is a program called Easy strength by Dan John and Pavel Tsatsouline that have you doing each exercise 2 sets x 5 repetitions 5 days a week. The important part here is to go really easy on each set (hence the name) in order to not accumulate much fatigue.

This program probably works slightly better than a 3 sets x 5 repetitions 3 days a week program. The reason is probably that frequent practice causes more of some not yet understood neural adaptation.

For most people training 3 x a week is more practical than 5 x a week. However for some people such as firefighters, police officers and military personell, high frequency training may be better. The reason is that with this style of training you are never really badly fatigued in case you eg have to run after a criminal. The same thing may be harder to do the day after 3 or 5 sets of 5 reps almost to failure squats.

Also there is a other model of stimulus and recovery named the fitness-fatigue model:

In this model you are getting stronger from immediately after your workout. However the increase in fitness is masked by fatigue so that the performance is worse until you have recovered from the fatigue.

From the link above: "Without the fitness-fatigue model, we could easily fall into the trap of believing that the fitness adaptations to a workout only occur after a couple of days, because of the reduction in performance. In fact, adaptations probably occur very soon after the workout itself. For example, in strength-trained lifters, a large proportion of the adaptations in the central nervous system after a strength training workout occur on the same day as the workout. Also, muscle growth is stimulated by a transitory increase in the rate of muscle protein synthesis that is already falling before 24 hours have passed." This tells us that the fitness-fatigue model is slightly more correct but still a gross oversimplification.

I think both super-compensation and fitness-fatigue are just conceptual models made to fit what has been observed in practice. From what I understand Yakovlevs experiments were on glucose concentration in muscle cells. The jump from supercompensation of glucose to a general theory of training and recovery is so big that I would say that neither model really have any experimental basis or mechanism behind it.

5
What is the best way to integrate brief sessions in my workplace gym into my strength and body building practices?
2
Muscle size reduction sans loss
5
What are the implications of diminishing levels of soreness in Delayed Onset Muscle Soreness (DOMS)?
2
How far can you go with eccentric body exercises?
1
Partial reps for muscle growth
3
More protein = more potential for muscle growth?
6
Is physiology of muscle growth a pseudoscience?
1
Body building is sore, slow, and needs rest, but the heart doesn't. Why?
0
Controlling muscle growth from running