Tensions of the strength curve

Influencing the strength curve during a weight training workout. 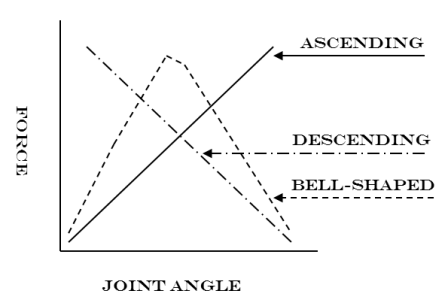 I have read about the strength curve and the fact that certain exercises for the same muscle have their peak contraction or (hardest moment throughout the movement) at either the begining, middle or end of the strength curve, or on the ascending, bell shaped or descending trajectories respectively.

But most importantly, I've been told that one must seek to train or "target" all of the tensions during a session by including exercises that have their peak contraction at each of the 3 main moments explained. As an example for the Biceps Brachii:

-The exercise "incline dumbbell curl" has its peak at the begining of the exercise's ROM (Range Of Motion).

-A regular barbell curl will have this peak at the middle

My questions following this logic are: If necessary to do this at all, then what is the actual benefit of doing so, is targeting all tensions needed for muscle simmetry? required for maximizing strength? Or is it just a way to burn you out faster throughout the workout...

Also since I presented the example of the "no money curl" which when assisted with resistance bands changes the peak contraction to the end of the exercise's ROM, can all exercises be modified to alter their peak contraction to another fase of the strenght curve?

Finally, do all exercises follow this diagram's logic, or are there ones that have an equal contraction throughout the whole movement (no peaks at begining, middle or end but equally easy or difficult throughout the ROM)? So this would be like a flat horizontal line on the diagram I'm guessing.

Anyways, hope I sounded clear and I didn't confuse you guys, Thanks.

Finally, do all exercises follow this diagram's logic, or are there ones that have an equal contraction throughout the whole movement (no peaks at beginning, middle or end but equally easy or difficult throughout the ROM)? So this would be like a flat horizontal line on the diagram I'm guessing.

Your diagram is missing a flat strength curve.

There are four different strength curves that I'm aware of:

**Note: You do not have to do this in every single workout. It is not 'necessary,' but it is a good idea to add variety over the course of a macrocycle of programming. **

In fact, that might be a bad idea to do it all in one workout, depending on how you've subdivided your training.

If you had to use all of them in every workout, you'd have to spend quite a bit of time training. It is not necessary for all of them to be present in any given workout, but it might be a good idea to spread that out between two workouts if hypertrophy is the goal. At the very least to utilize them all within a training cycle (macrocycle: about 6-12 months).

What you're describing about strength curves certainly exists but how it affects training is a little more complicated. For instance it's likely far more relevant to muscle hypertrophy than muscle strength.

It appears to influence muscle hypertrophy in one or all of the four following ways:

I think it's important to note that strength curves shouldn't be your only consideration. Progressive loading is the most important consideration but joint position and range of motion also alters muscle hypertrophy.

That being said, movement variability does seen to support development to specific strength. i.e. doing rack pulls if they improve a weak area of your deadlift, will likely improve your deadlift.

From what I've read in the literature movement variability in general is also a good idea. Mostly for joint health and coordination/neurological function. Most people anecdotally will report feeling better about training with more variability, as a general rule. Doing the same stuff over and over again, tends to beat up on your body and increases injury potential.

Movement variability is defined as the normal variations that occur in motor performance across multiple repetitions of a task. All of your examples are an arm curls, with subtle differences in leverage, so they all provide some variability to the same movement.

I'd encourage you to vary the movements you use semi-regularly for health and variety. Approx. once every month or two. Perhaps err to longer if hypertrophy is the goal.

can all exercises be modified to alter their peak contraction to another fase of the strength curve?

Yes, for the most part you just change the tool being used to train the movement.

Not the answer you're looking for? Browse other questions tagged strength bodybuilding muscle-gain functional-strength or ask your own question.

24
How does muscle size relate to strength?
4
Implications of the fact that resistance bands doesn't provide constant force for pull throughs and in general
0
Increase in Belly size after workout
5
How long would the training plan from this answer take to get to the level wanted in the question?
2
Will 5x5 build strength and size?
2
Am I expecting too much too soon?
11
Practical applications of the earthquake/bamboo bar
5
Can I increase flexibility by strengthening muscles?
3
Constant load exercise?